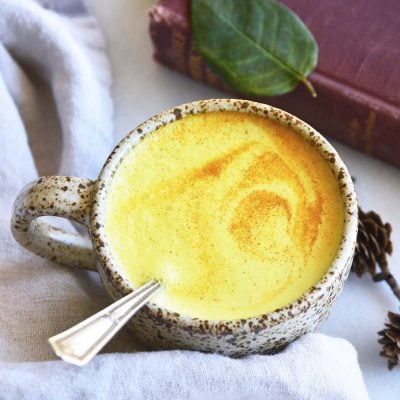 Posted on February 13, 2019 By Faith Gorsky
Jump to RecipePrint Recipe 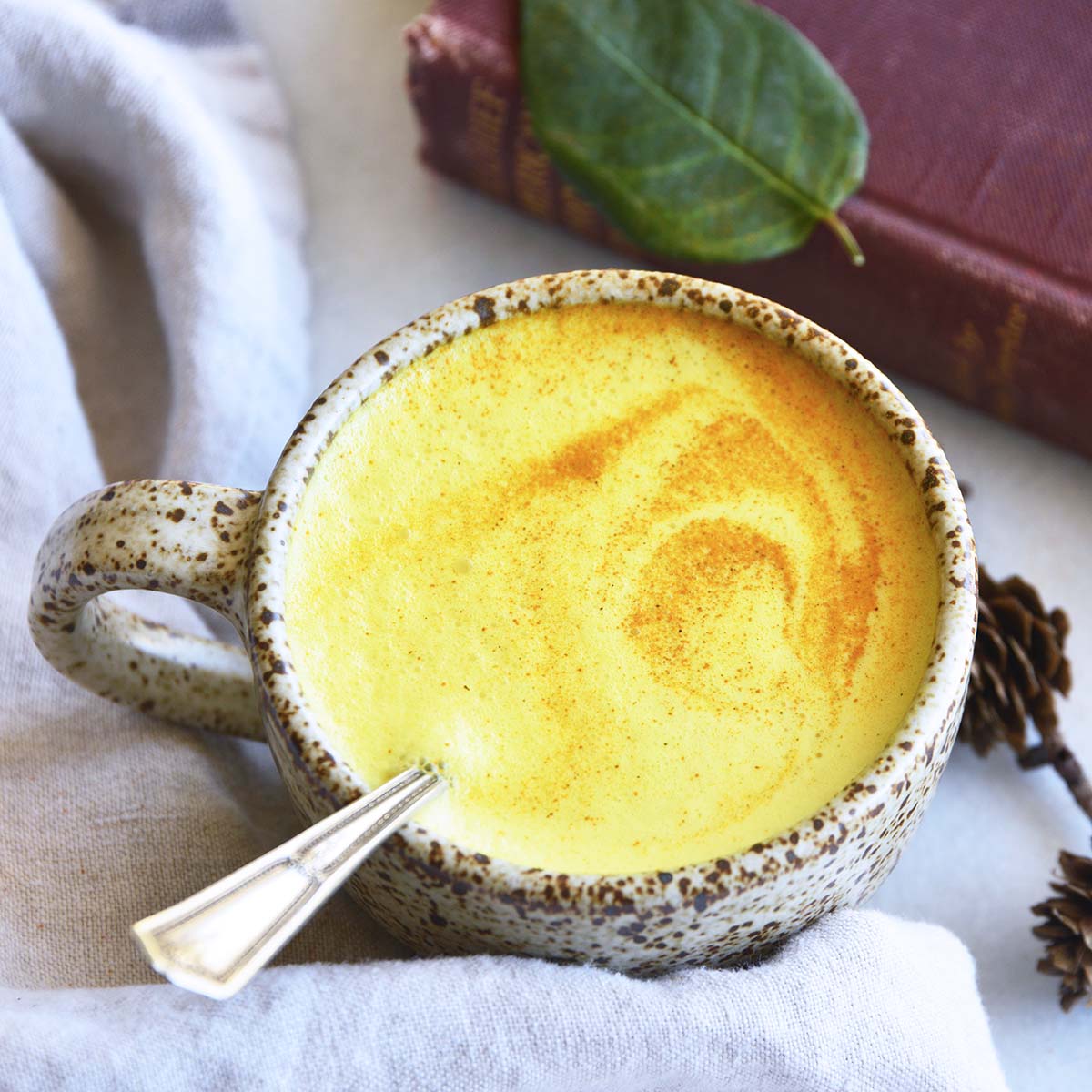 Disclosure: We’re super excited to announce that we partnered with Vital Proteins to do this product review. Vital Proteins compensated us for our time; however, all opinions expressed are our own. Thank you for supporting the brands that help make this blog possible!

Our Easy Bulletproof Golden Milk Recipe is velvety smooth with a foamy top, aromatic with vanilla, coconut, and spices, and will keep you satisfied all morning long. 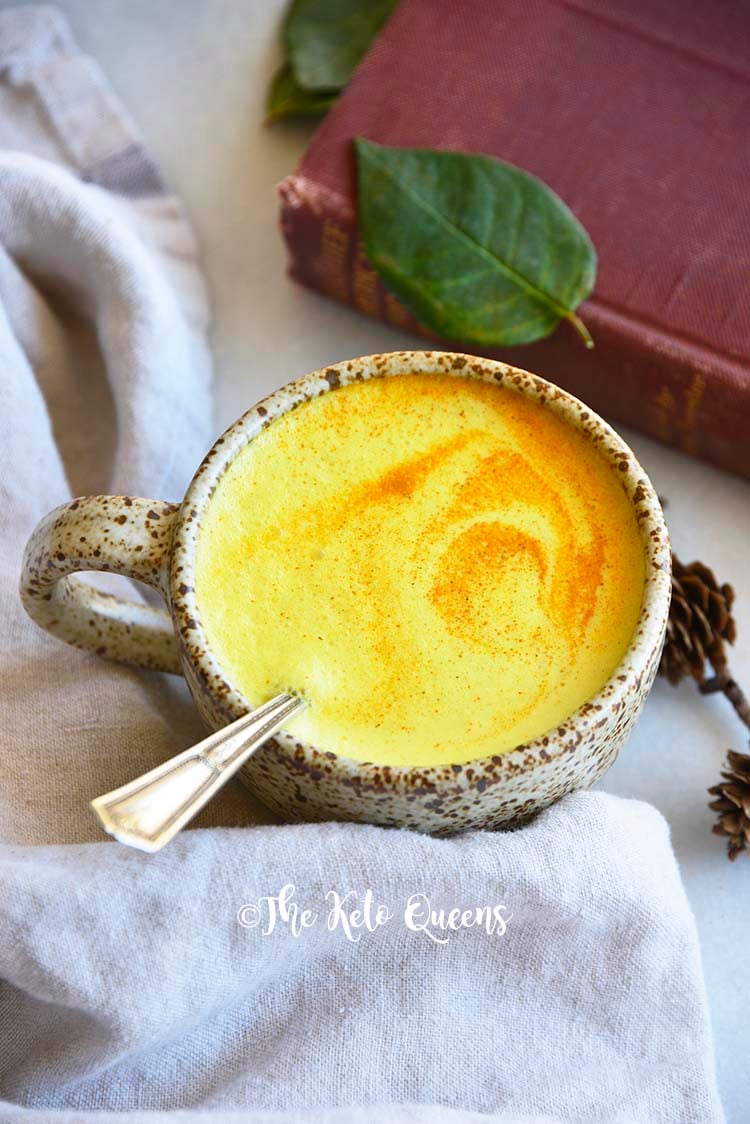 During the winter months, we all love a soothing hot drink. Bonus points if it’s also nourishing! Our Easy Bulletproof Golden Milk Recipe is based on a traditional Indian turmeric milk and has all the same health benefits. However, our recipe is amped up a bit in terms of flavor and nutrition.

We added ghee and coconut oil to make our golden milk bulletproof. The flavor of coconut is lovely in this drink, but you can use MCT oil if you prefer. Also, we bumped up the nutrition by adding Vital Proteins Collagen Peptides, which dissolves effortlessly into this drink and has the added health benefits of improving hair, skin, nails, and joints. And we love that their product is gluten free, dairy free, sugar free, Whole30 approved, paleo friendly, and of course keto! 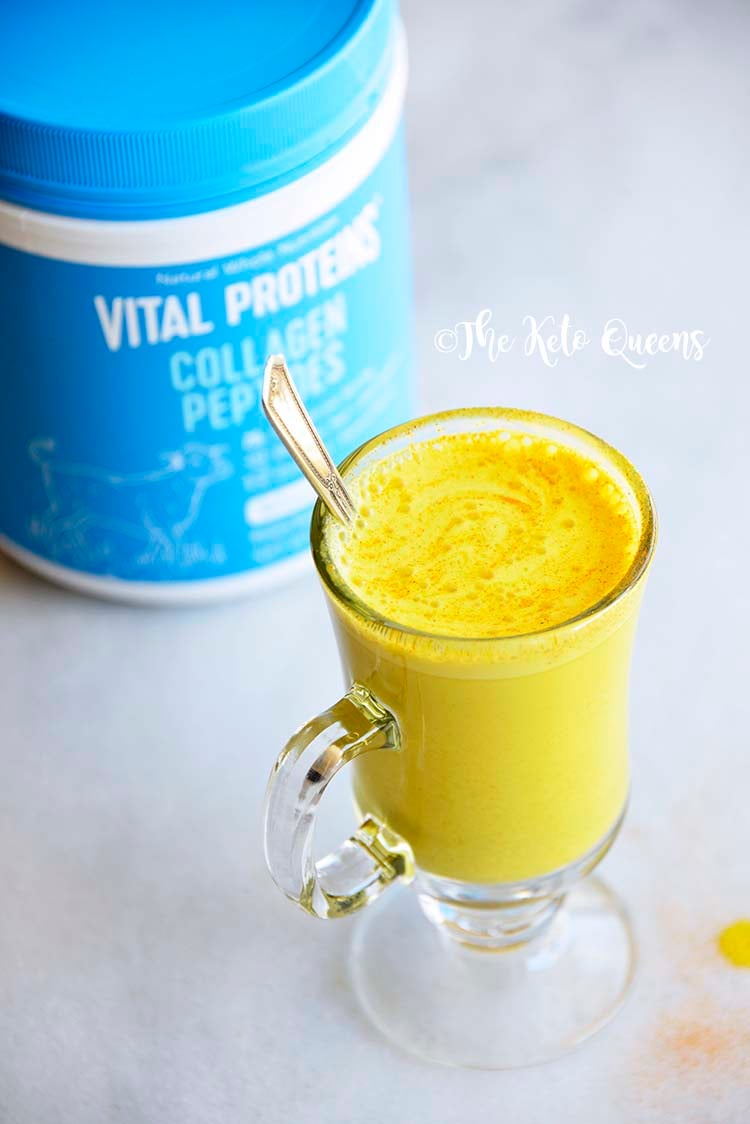 Our Easy Bulletproof Golden Milk Recipe is caffeine-free so you can enjoy it any time of day. If you make it in the evening, it’s a soothing way to relax and unwind before bed. Or if you’re trying to wean yourself off coffee, make this beautiful Easy Bulletproof Golden Milk Recipe as part of your morning routine. The healthy fats and protein will keep you satisfied for hours! 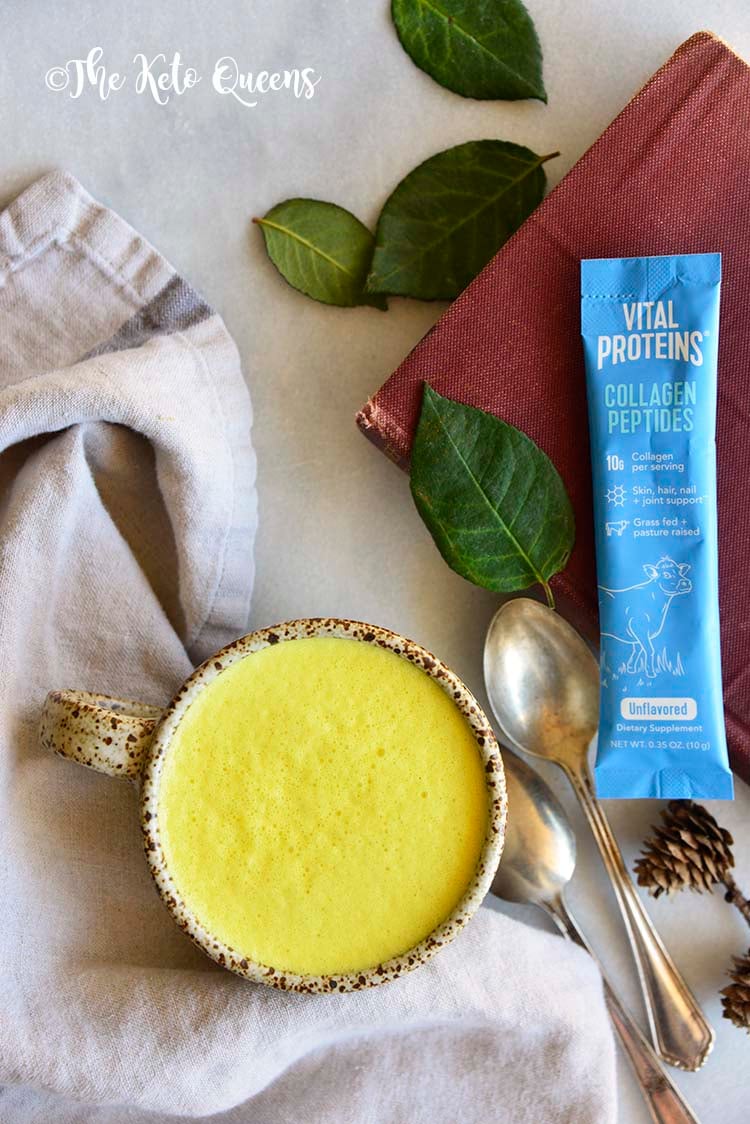 What is Turmeric Milk?

Turmeric milk is an Indian drink that goes back centuries. In the holistic health system of Ayurveda, Turmeric Milk is a blend of milk (such as cow’s milk, or a nut-based milk), turmeric, sweetener (such as honey), and spices (like cinnamon and ginger). Black pepper is also a common addition, because black pepper enhances the bioavailability of curcumin, which is found in turmeric.

This Ayurvedic drink is believed to have healing properties, helping with everything from colds, to flus, to stomachaches. Basically, it’s a home remedy, similar to how in Western culture we view chicken noodle soup as a cure-all. 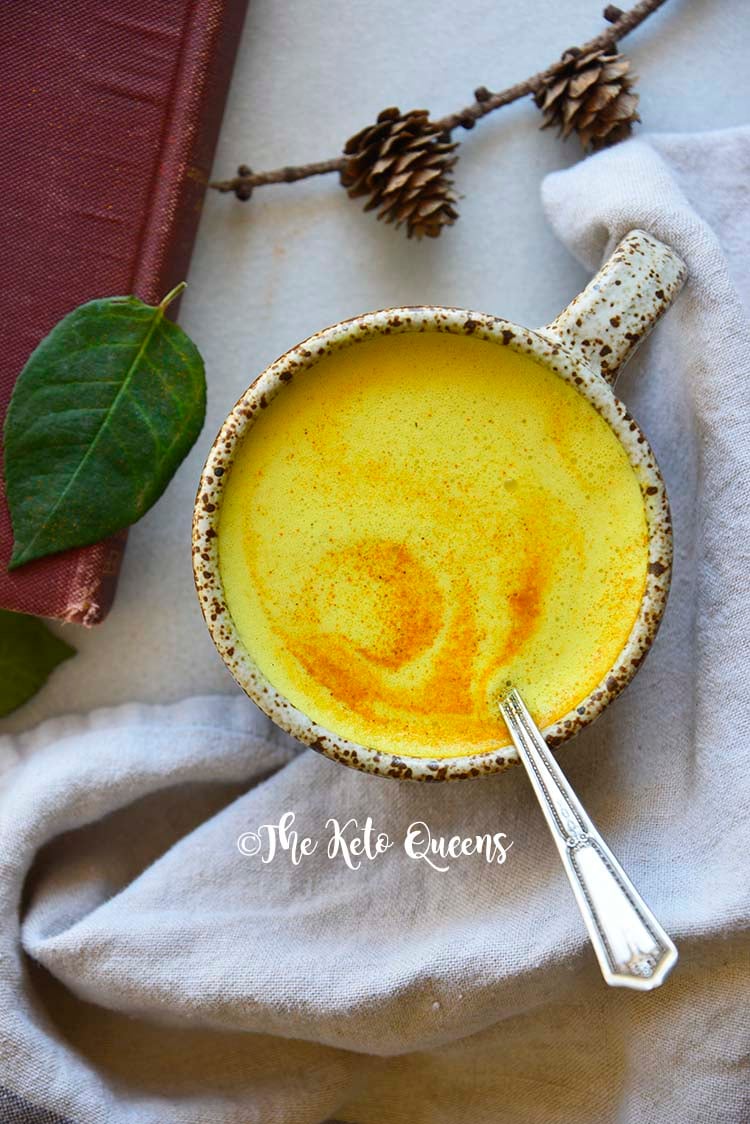 In its most basic form, turmeric milk contains the following ingredients:

Turmeric milk is a very soothing hot drink, and it’s also very easy to make. Just combine all ingredients (except honey, if you’re using it) in a pot on the stovetop and cook until steaming. Remove from the heat and add honey if desired. Pour into your favorite mug and enjoy!

In Ayurvedic culture, turmeric milk is believed to be immune-boosting with many health benefits due to its anti-inflammatory and antioxidant properties. It’s also thought that turmeric may improve brain function, memory, and mood, and may help protect against heart disease, as well as help lower blood sugar levels. (Read more about the health benefits of turmeric milk on Healthline and Vogue India.) 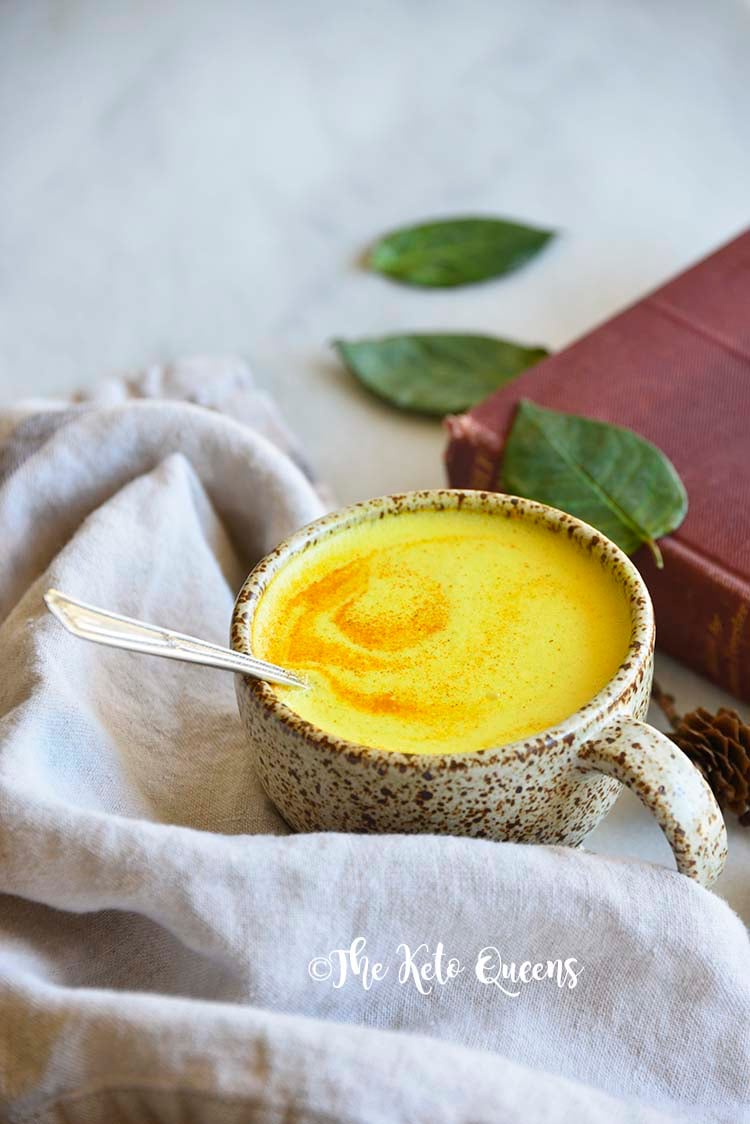 How to Make Golden Milk

Similar to turmeric milk, add all ingredients (except honey, if using) for golden milk to a saucepan on the stovetop and heat until steaming. Remove from the heat, add honey if that’s your sweetener of choice, and serve.

If you make golden milk frequently, it’s helpful to make a golden milk powder or paste that you can keep on hand to help the drink come together quickly.

This is basically just a spice blend that you can mix into your milk of choice. Golden milk powder typically includes the following spices:

To make golden milk powder, just mix together all spices. Store this blend in a glass jar in the pantry for up to 6 months.

This is a paste that usually has the following ingredients:

To make paste, combine these ingredients in a saucepan over medium-low heat. Cook, stirring frequently, until it forms a paste. Let the paste cool, transfer it to a glass jar, and store it in the fridge for up to 2 weeks. 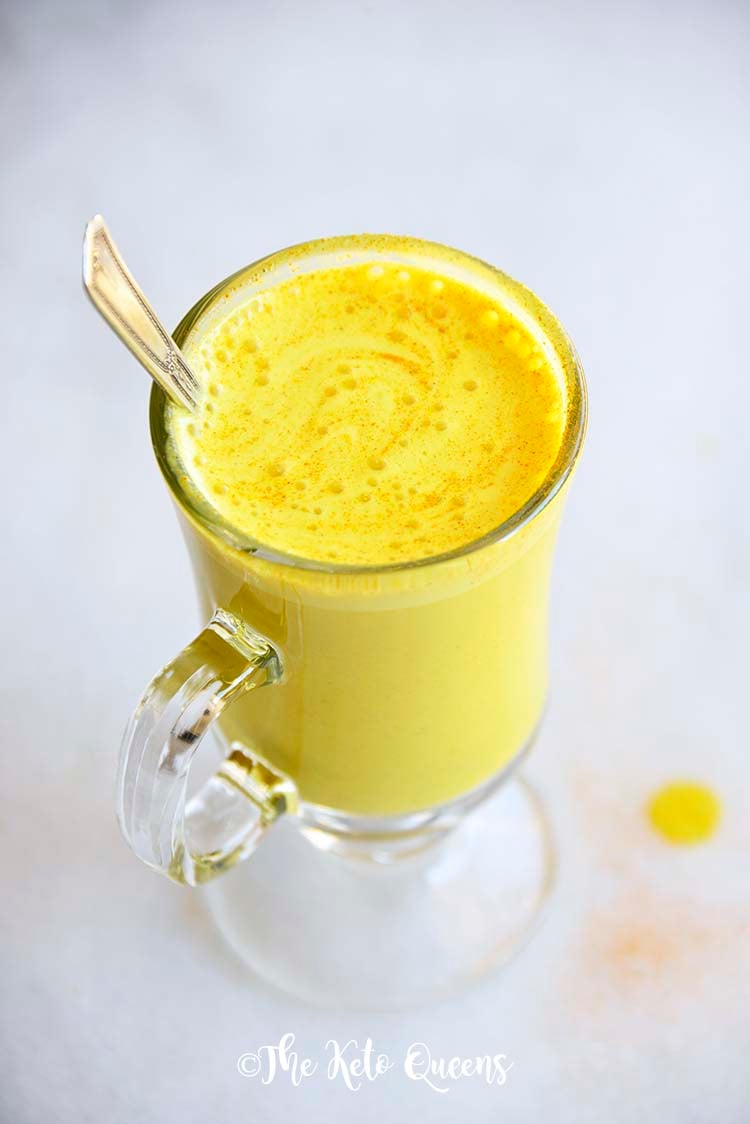 Golden milk has the same anti-inflammatory and antioxidant benefits that traditional turmeric milk has. We also added Vital Proteins Collagen Peptides, which bumps up the nutrition even more!

Many people say that golden milk helped them with weight loss, which they attribute to the antioxidant curcumin (from turmeric) helping break down fat. (Read more about golden milk or turmeric milk and weight loss on Times Now News and Express.) Of course before you start any weight loss regimen, check with your doctor first! 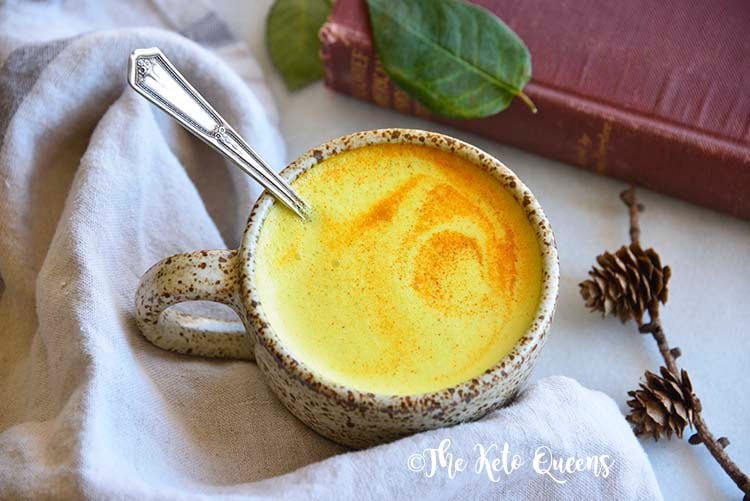 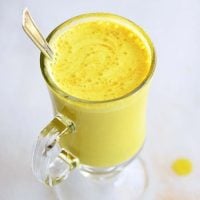 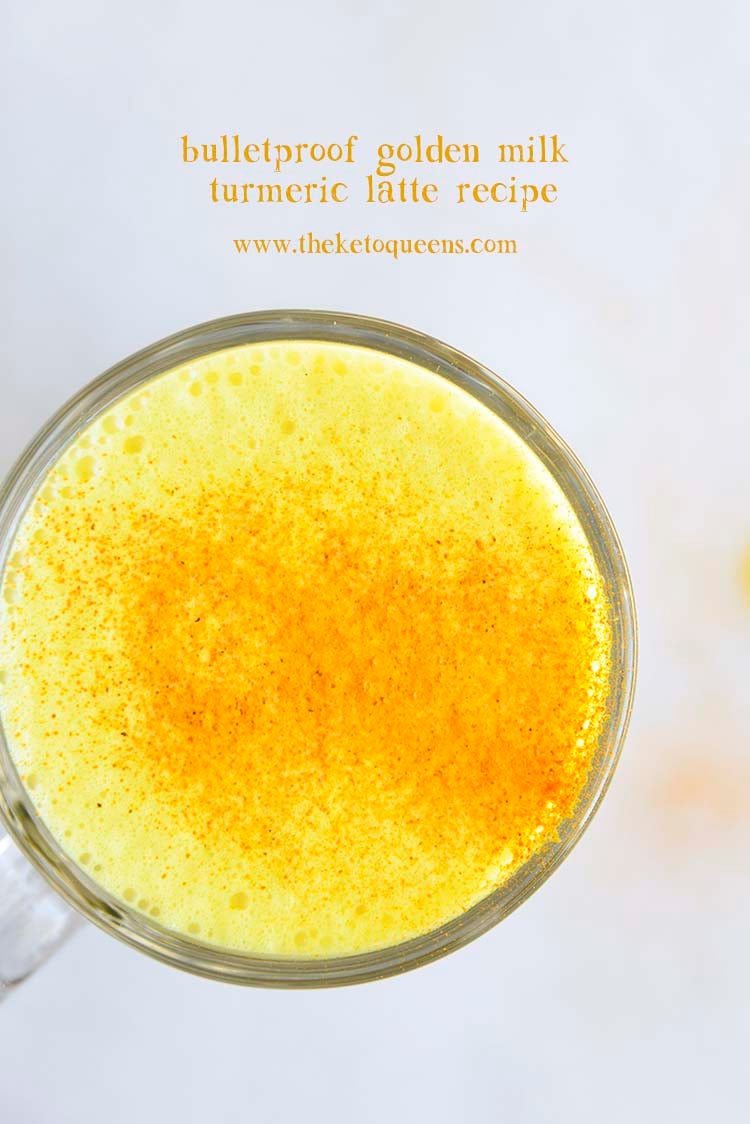 Disclosure: This post contains affiliate links to products we believe in, which means that even though it doesn’t cost you anything extra, The Keto Queens will receive a small amount of money from the sale of these items. 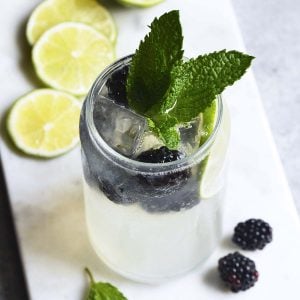 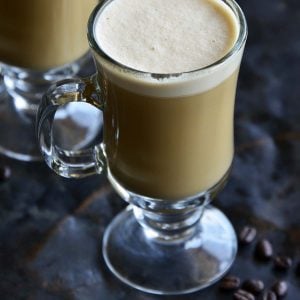 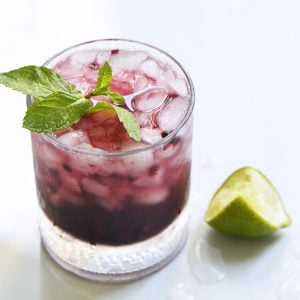 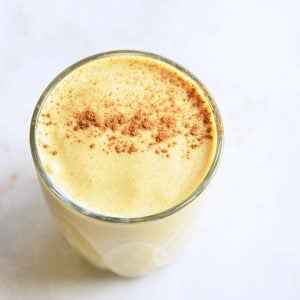