Hidden Carbs at Starbucks – What Not to Eat! 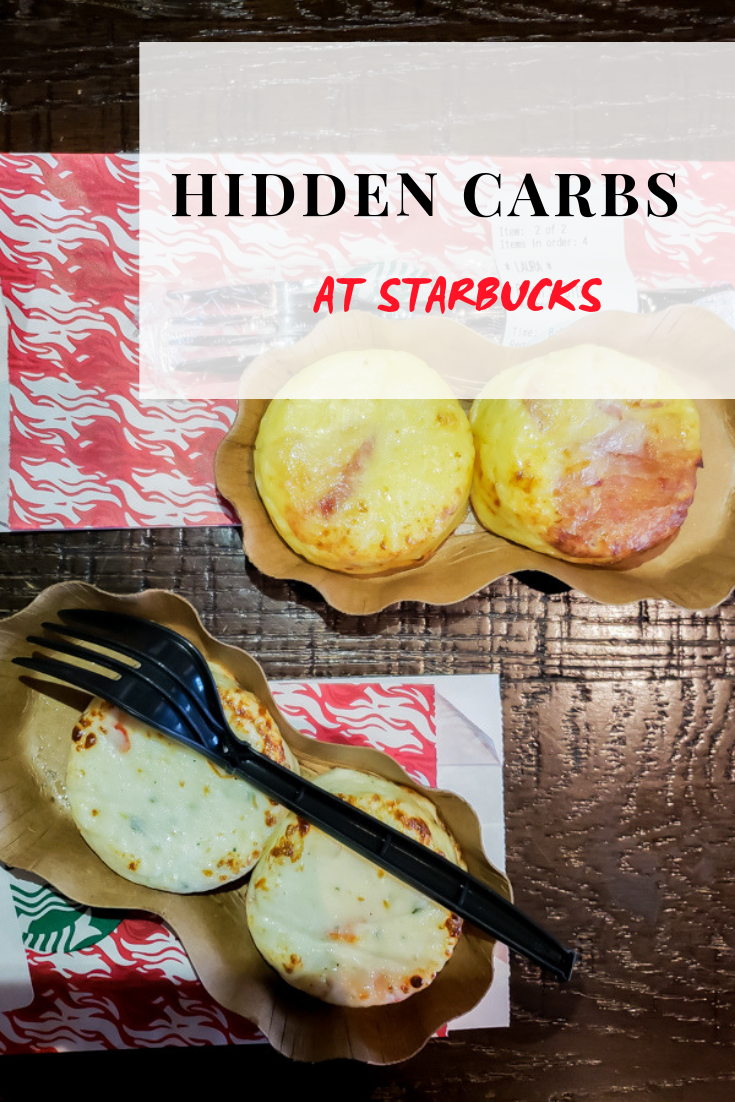 Y’all know how much Faith and I love our Starbucks tea and coffee, but what happens if you’re hungry and you want to get something to eat to? In today’s post we’re going to go over what not to eat at Starbucks if you want to follow a low carb or keto diet. 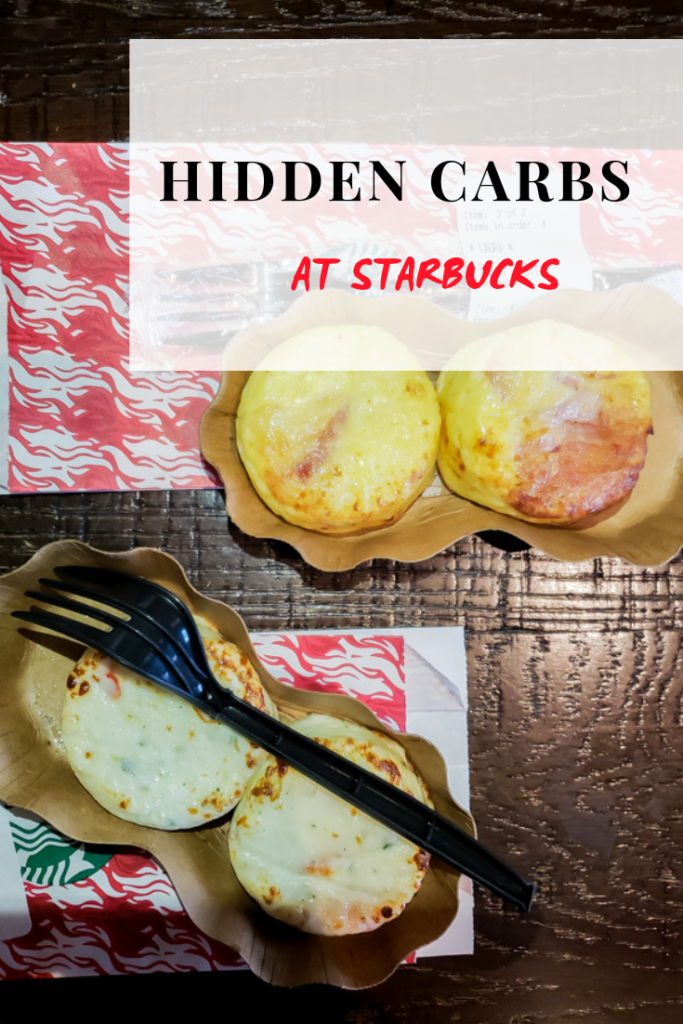 We’ll go over some foods that you might think are keto friendly, but really aren’t! Either because they’re high in carbohydrates or the portion size may be a little misleading.

And if you missed it, check out one of our most popular posts – Keto Starbucks Drinks – Our 5 favorite drinks to order!

This Country Archer brand of beef jerky has 6 grams of carbs per 1oz serving. I haven’t met anyone that can just eat 1 oz of beef jerky! 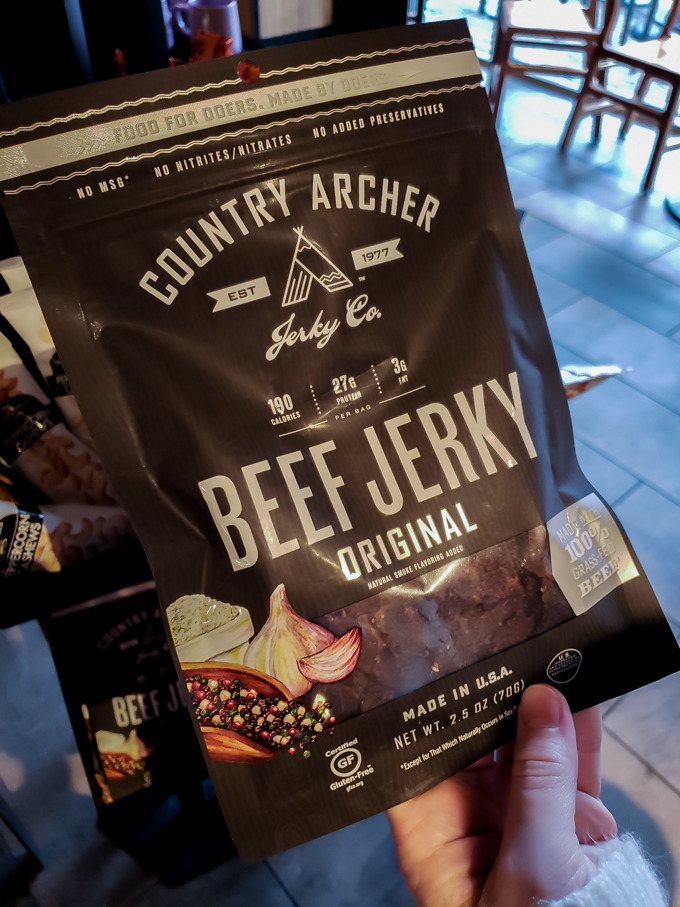 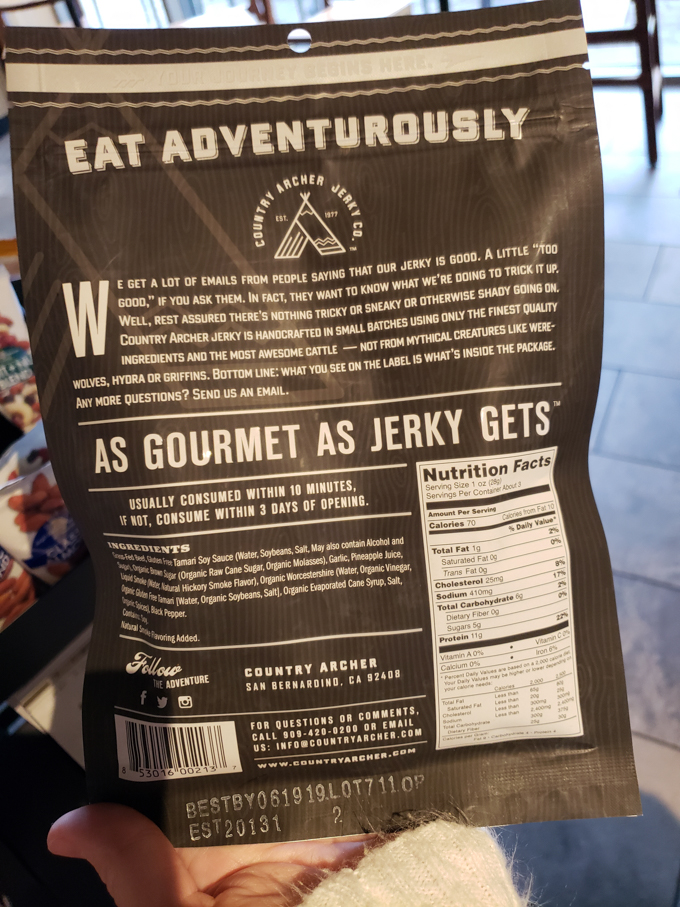 At first glance I was super intrigued by these Emmy’s Organics Dark Cacao Coconut Cookies. They say only 8g of carbs (6g net carbs) per serving, but 1 serving is only 1 cookie.

And these cookies are small, but are more calorie dense than others so you may be able to get by with just eating 1 or 2. 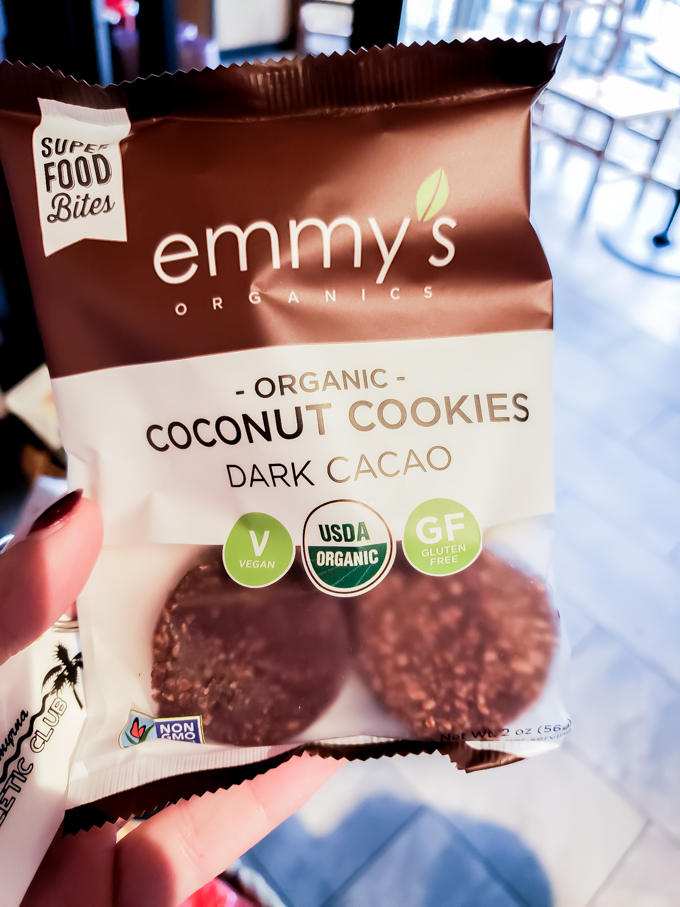 Personally I LOVE chocolate and coconut and this combination is dangerous and I’d again probably end up eating all 3. 1 cookie has 100kcals, 8g of fat, 8g total carbs, 2g fiber, and 1g of protein. 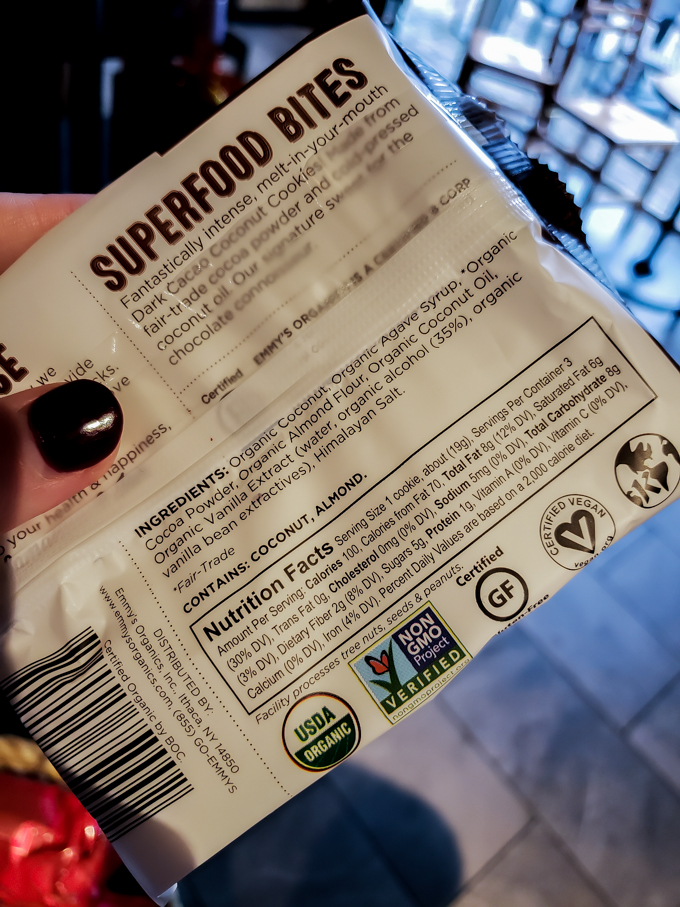 Now some people just starting a keto diet may link cashews would be a good low carb nut option, but actually they aren’t. Cashew are not even a nut! They’re a legume.

For 1 package of these peppercorn cashews you’ll be getting 240kcals, 20g of fat, 13g of total carbs, 2g of fiber and 7g of protein.

Carb/Calorie ratio, these are a better option than the beef jerky but there are better low carb food options at Starbucks out there. 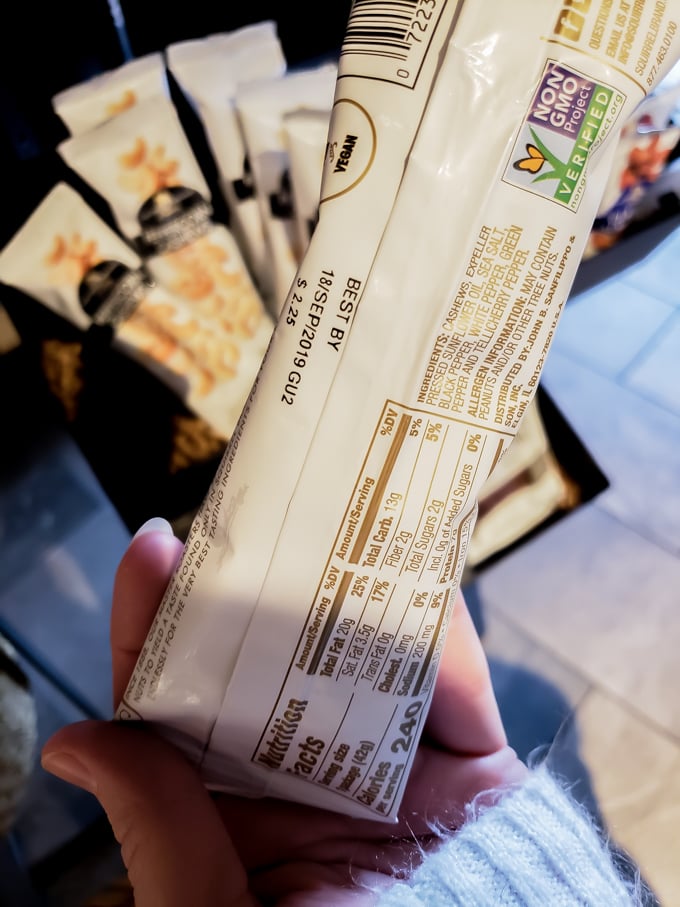 Splenda oh Splenda – they advertise you as a no calorie sweetener, but when you flip over to the ingredients label the first 2 ingredients are in fact sugar. And we all know that sugar contains calories. 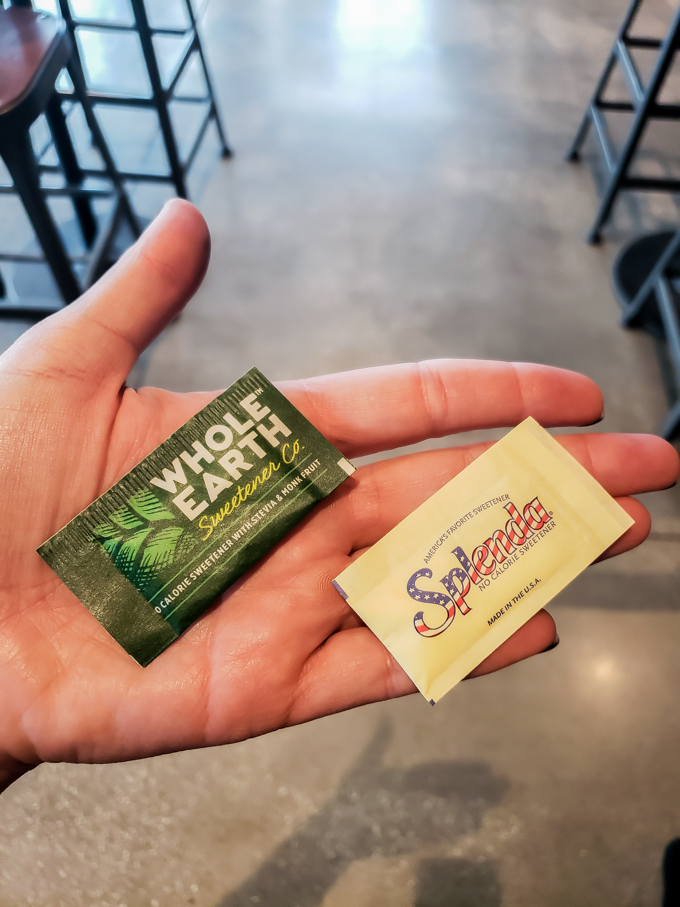 A better option to Splenda would be their Whole Earth Stevia, Monk Fruit and Erythritol blend sweetener. Or better yet, no sweetener at all! 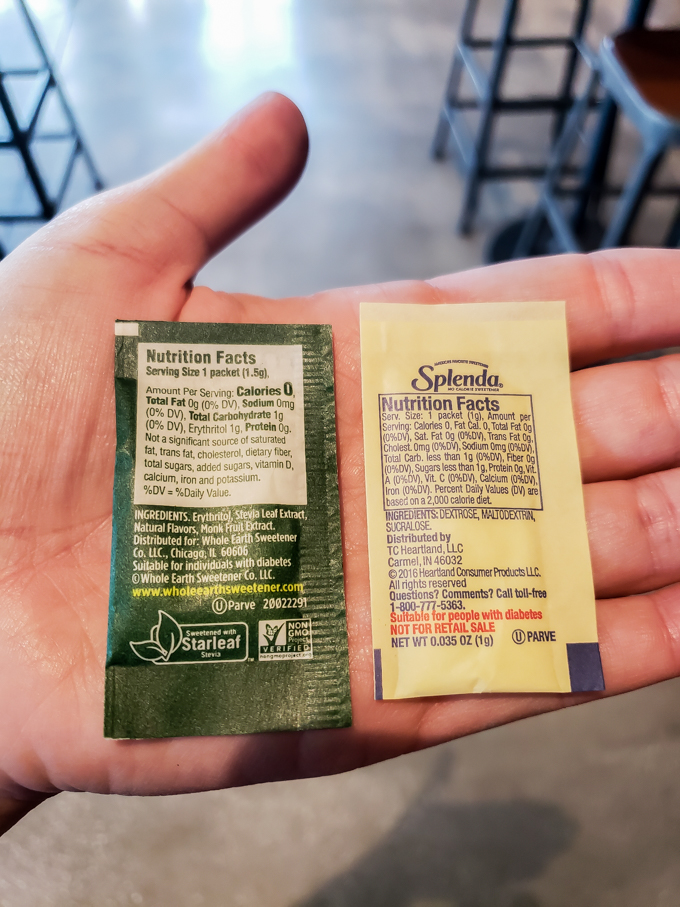 Since the inception of these guys, I whole heartily believe that the sous ice industry has taken off. Both Faith I and bought one and it was to make these Starbucks Sous Vide Egg Bites, but make them low carb. 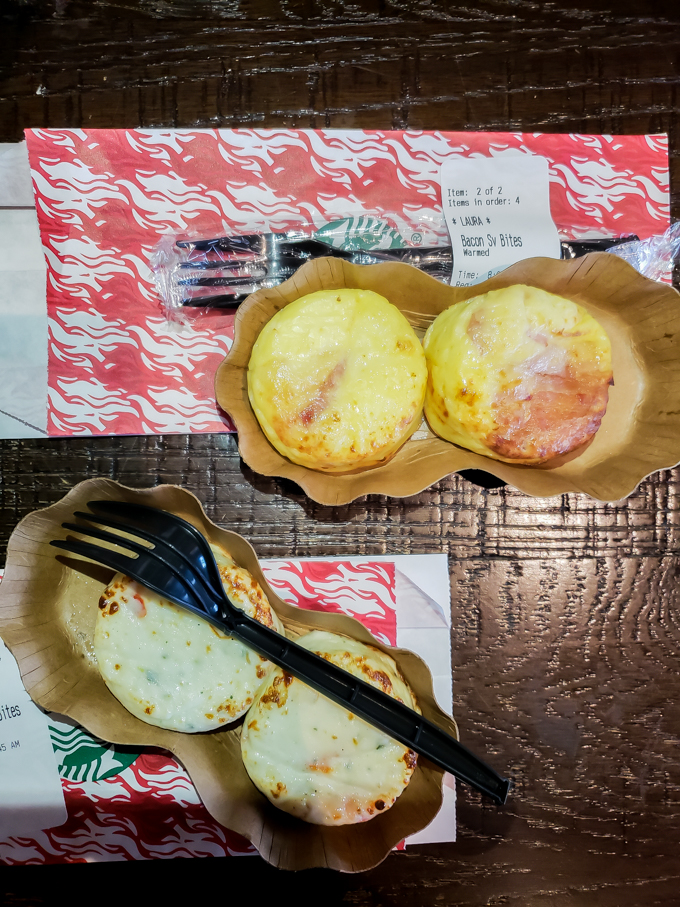 Yeah, these sous vide egg bites from Starbucks are not really that low carb. They are packed full of hidden carbs. Did you know that these egg bites contain potato starch and rice starch? 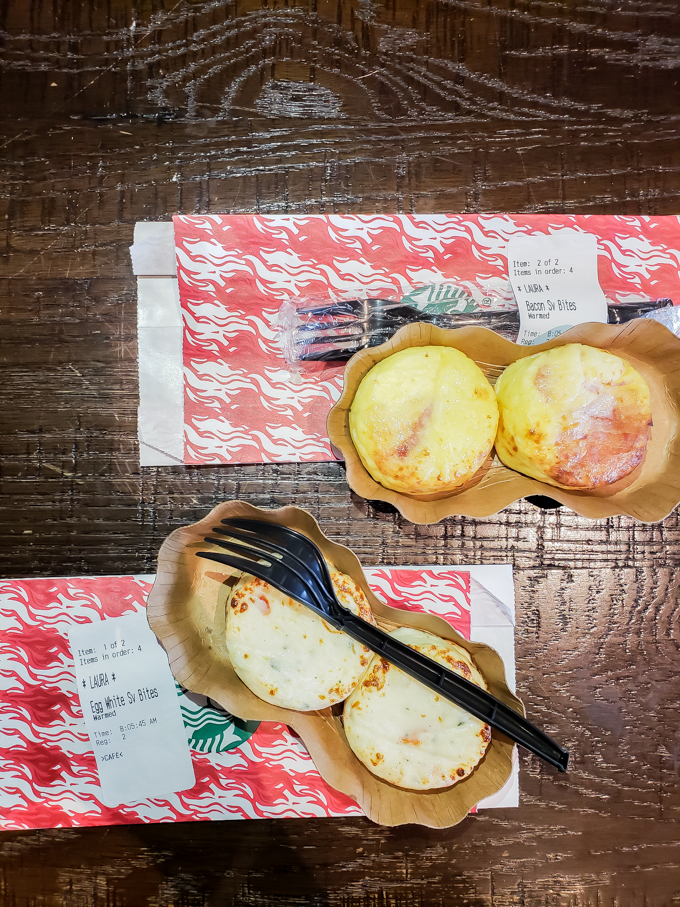 Pictured in the top right corner are the Bacon and Gruyere Sous Vide Egg bites which have 310kcals, 22g of fat, 9g of carbs, and 19g of protein.

Pictured in the bottom left are the Egg White and Red Pepper Sous Vide Egg bites and they come in at 170kcals, 7g fat, 13g total carbs, 1g fiber and 13g of protein. So for a calorie to carb ratio these are even worse than the beef jerky.

So if you were going to get the egg bites, which are still lower carb than some items, I would stay away from the egg white variations and stick with the whole egg options for a higher fat content. 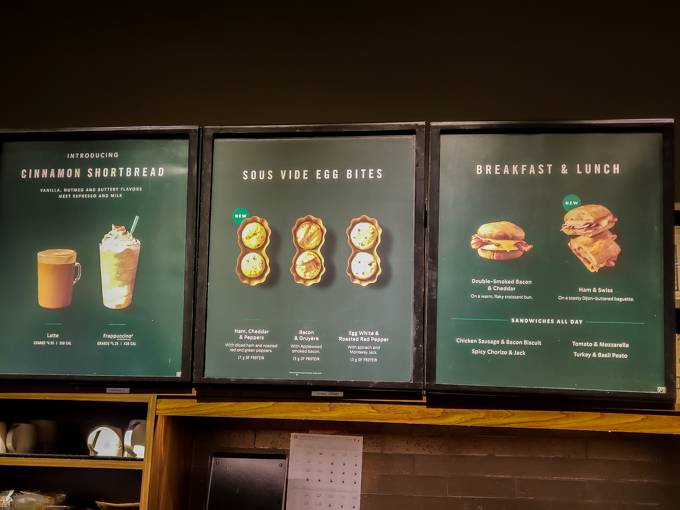 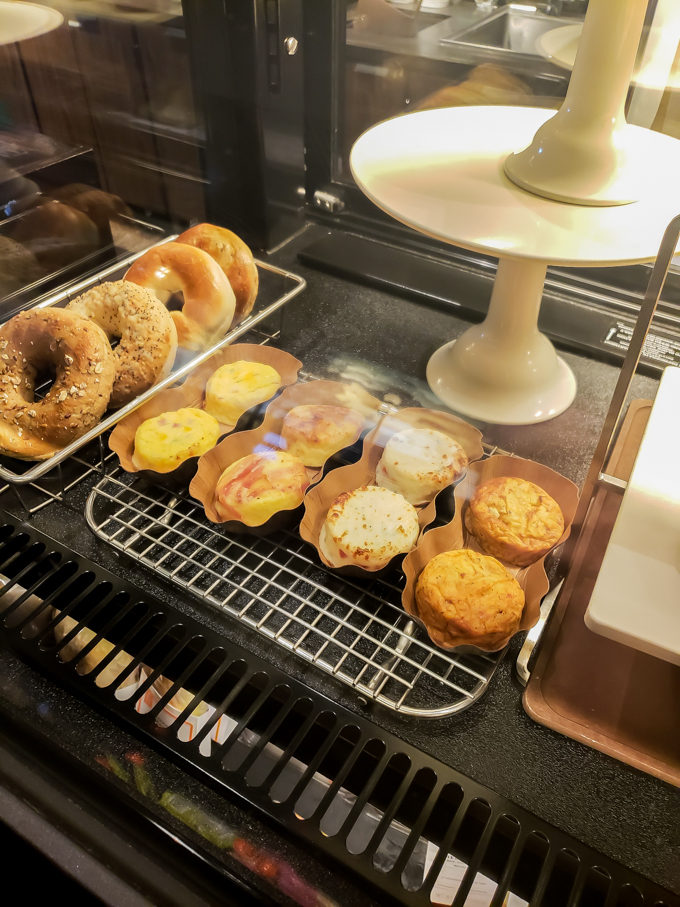 This lemon crunch parfait clearly displays a 14g of protein on it’s top label, to some they may think this is a healthier option. But once you turn to the nutrition label you’ll see what it’s actually about. 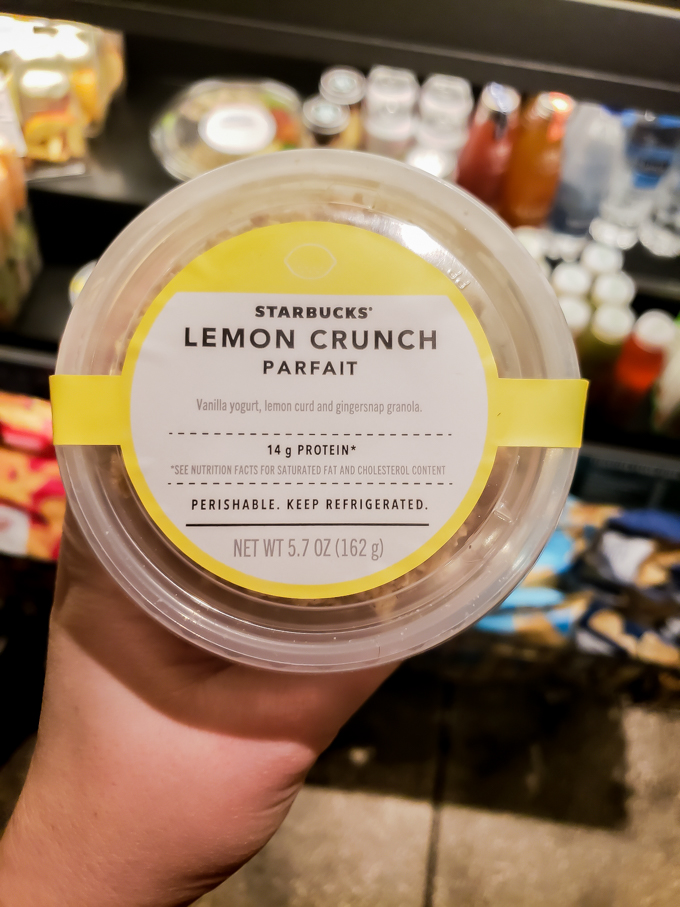 This lemon crunch parfait contains 330kcals, 12g of fat, 14g of protein and a whopping 42g of total carbs with only 1g of fiber. I’d steer clear of this if you are trying to follow a low carb diet! 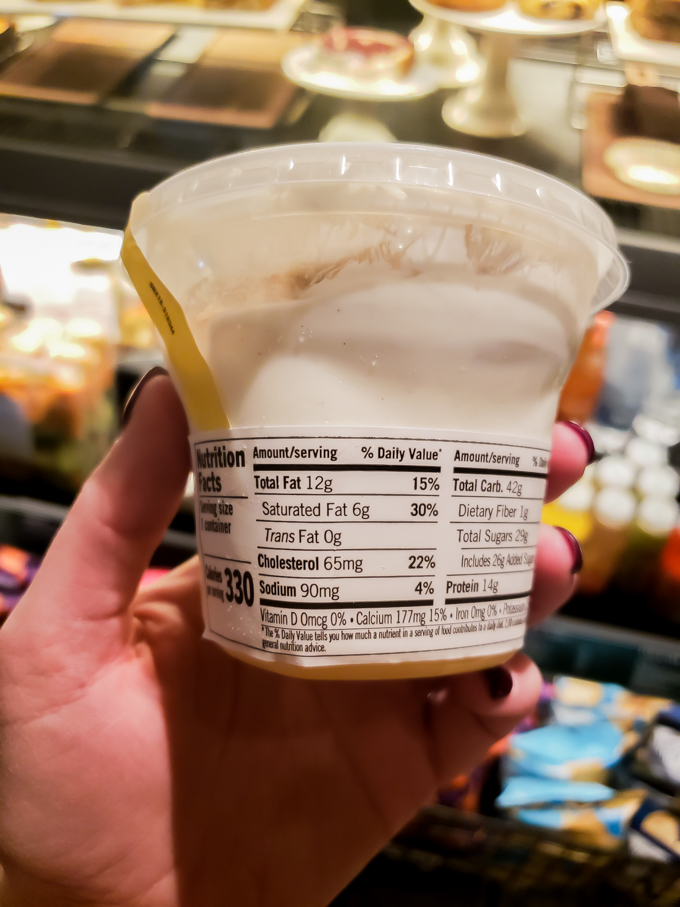 With a long list of ingredients, it’s easy to see how this egg and cheese protein box with apples and grapes makes our no-no list. Even the peanut butter is a honey peanut butter spread! 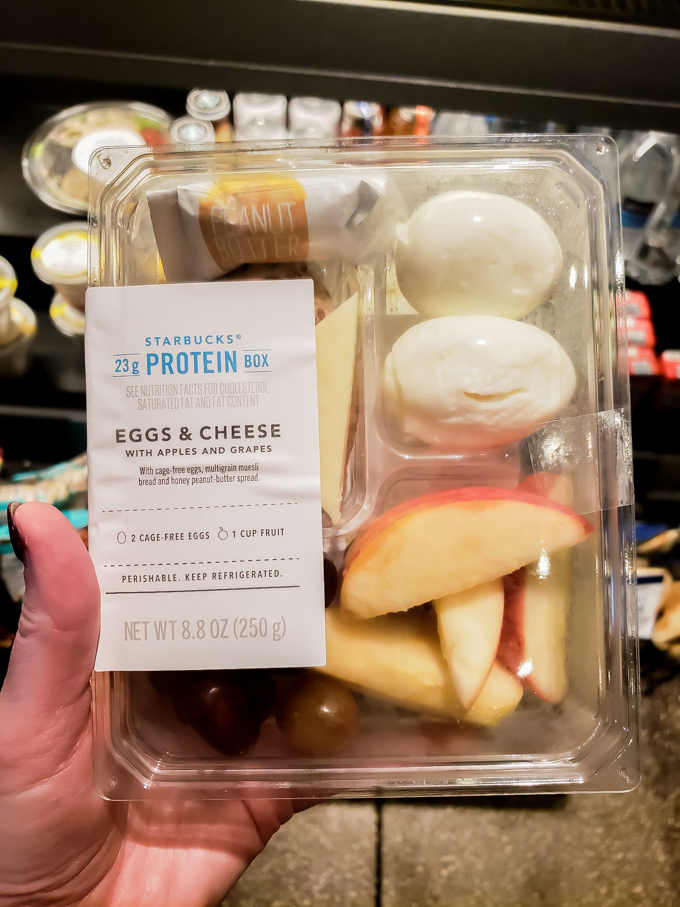 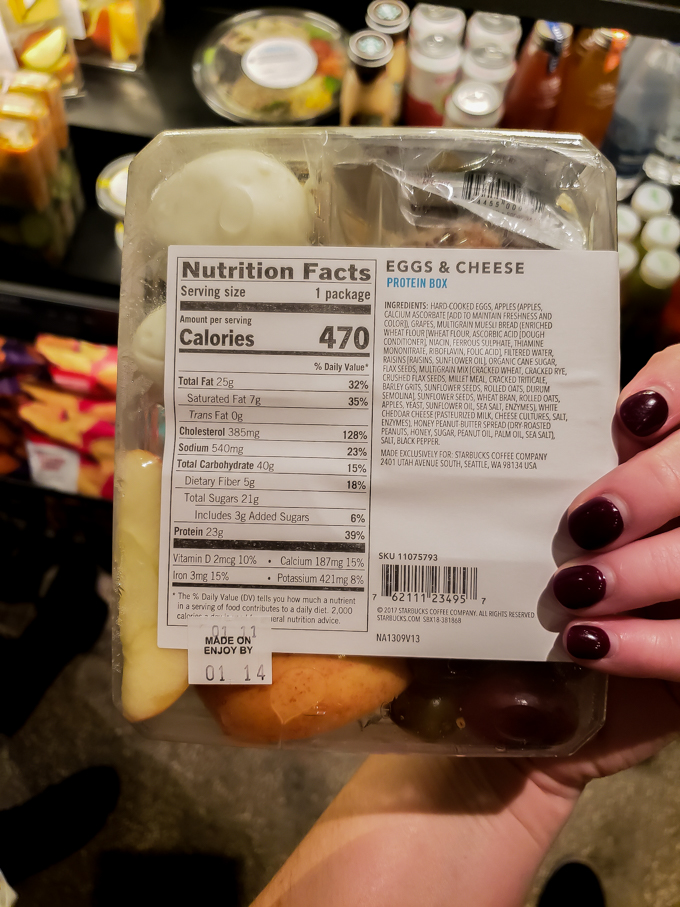 This cheese and fruit box is surprisingly lower in carbs than the Egg and Cheese box! Again like the other box, you can easily make this a lower carb option by omitting the fruit. 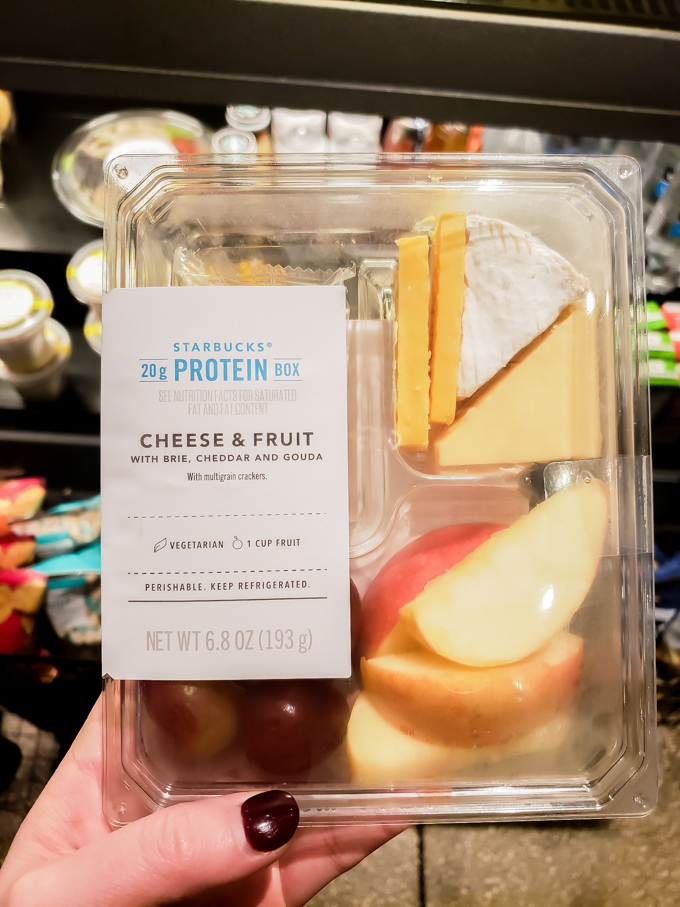 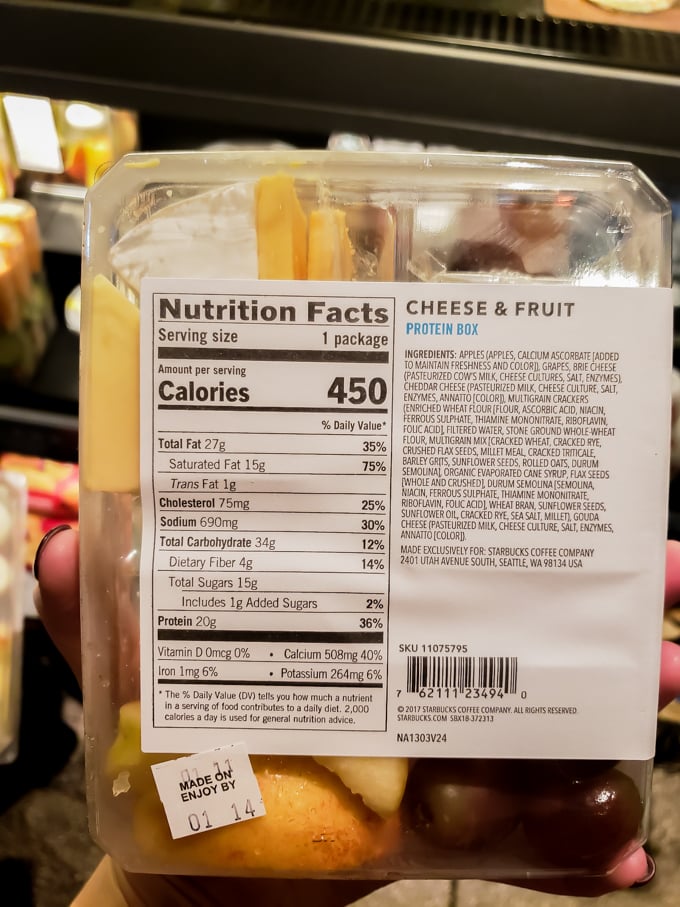 This bar claims to have 20+ Super Foods and to be USDA organic but it’s unfortunately higher up there in carbs. 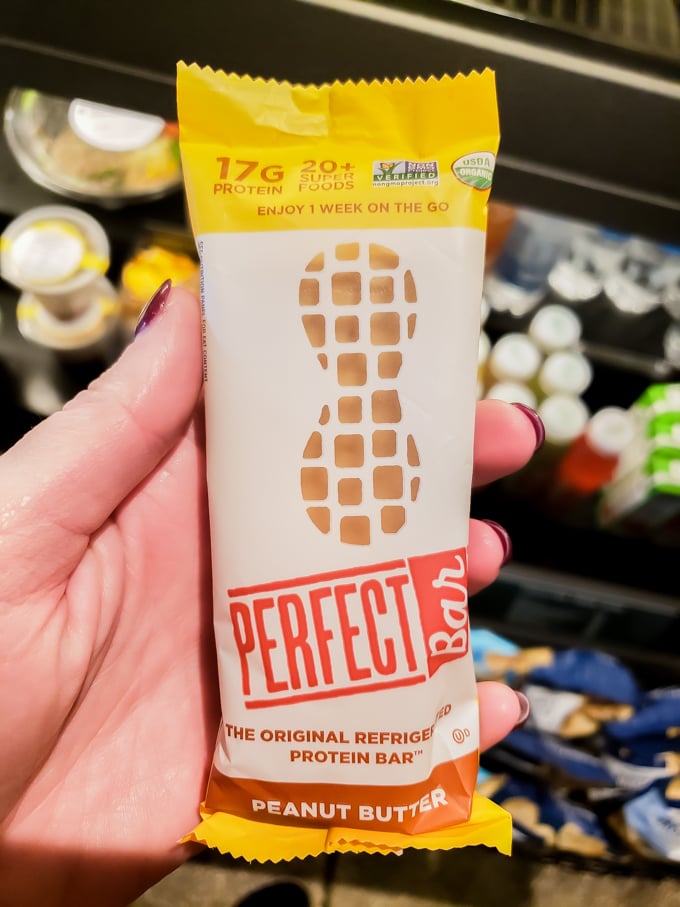 This RXBAR touts 12g of protein on the front of the label and no BS, but lets see how the carbs stack up! 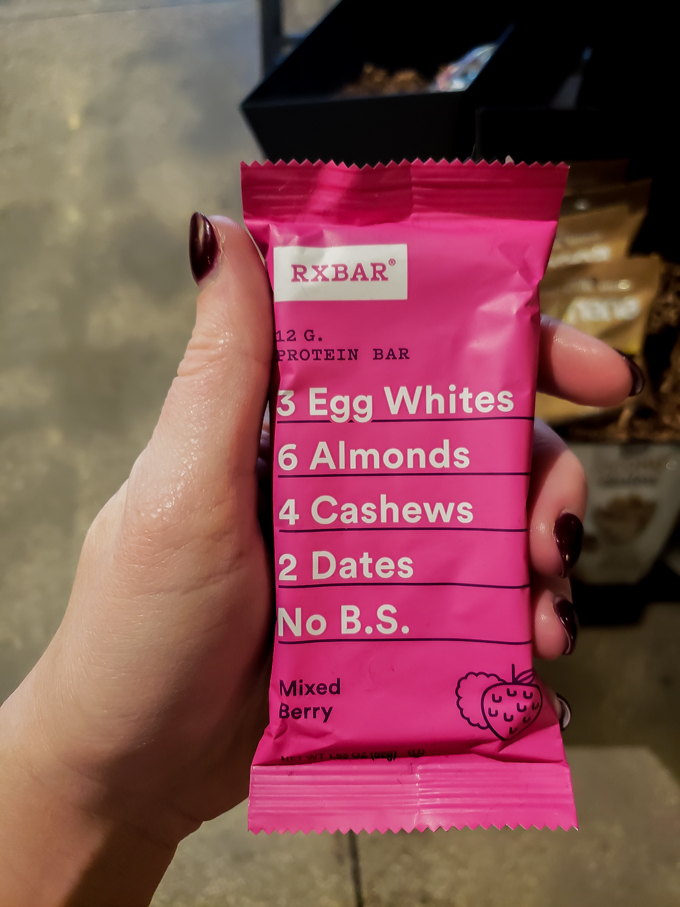 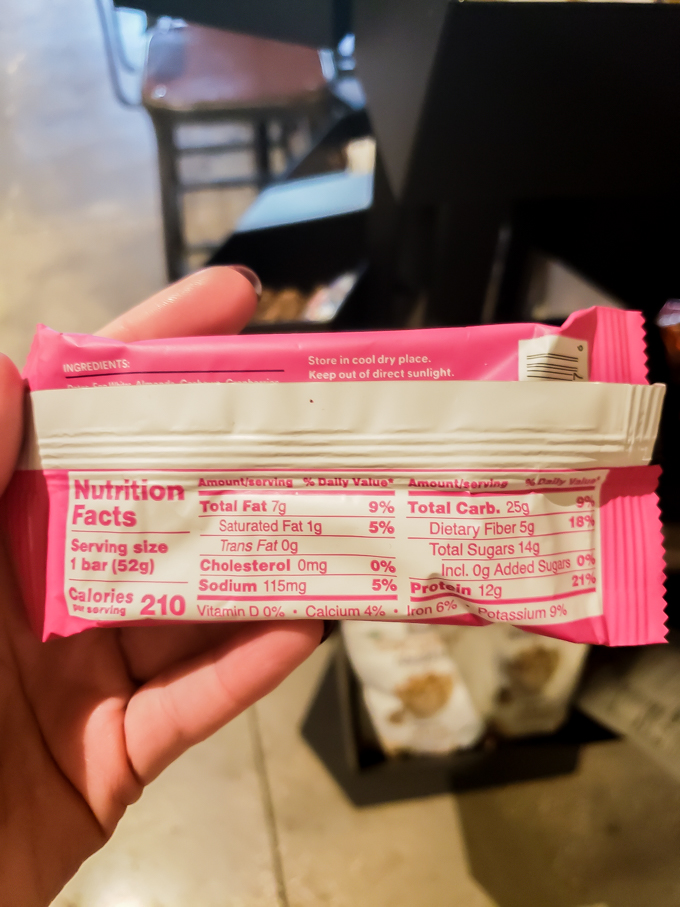 There you have it folks! This was a roundup of the foods that have hidden carbs at Starbucks.

Now we didn’t go through every single item there because it was super busy when we visited. We did noticed that each Starbucks doesn’t contain all the same foods.

But these are some of the main foods that we would avoid at Starbucks. Especially if you were trying to follow a low carb or ketogenic diet. Check back later this week, when we post about low carb foods at Starbucks.