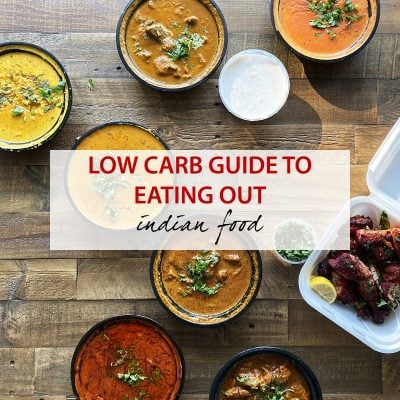 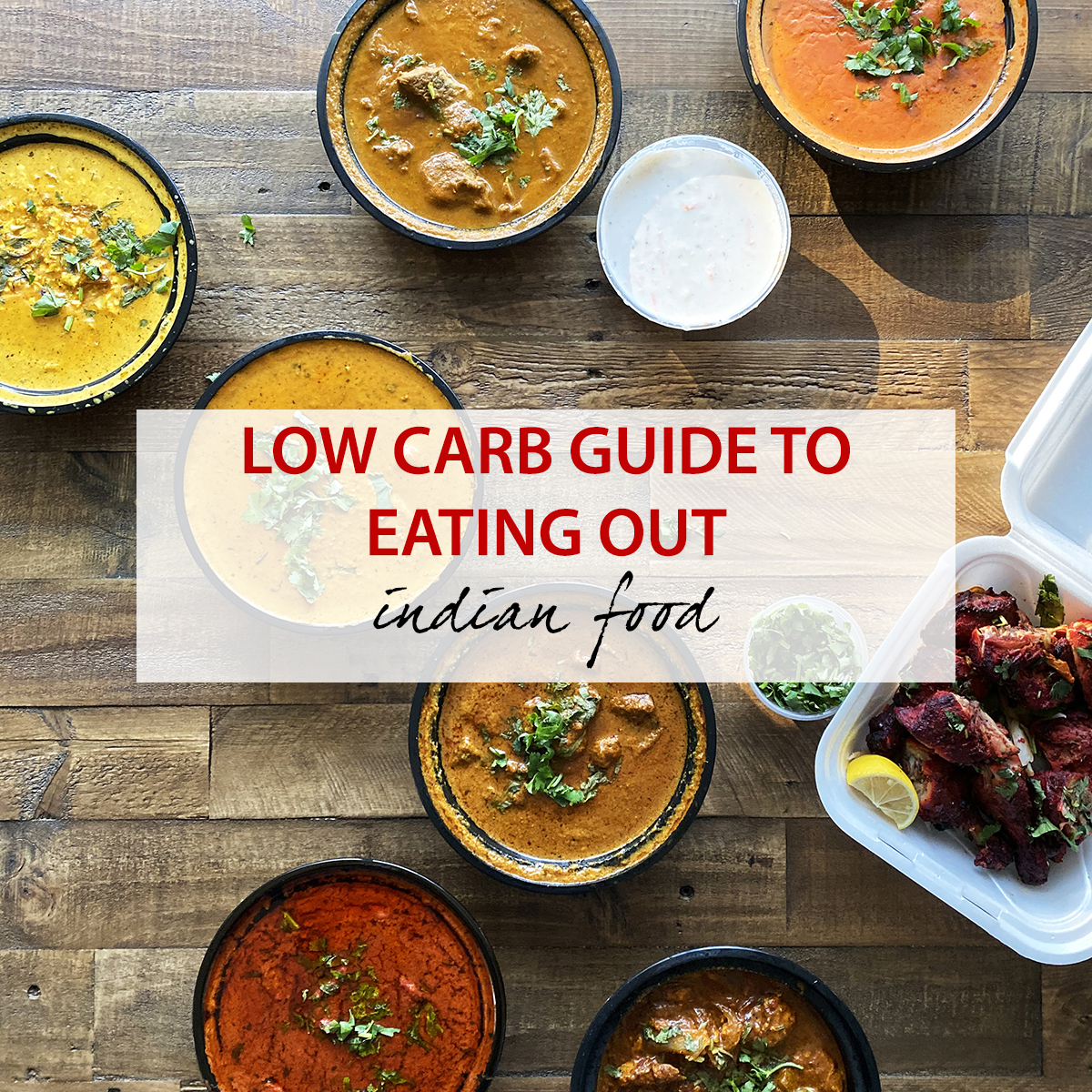 We absolutely had to include Indian Food in our Low Carb Guide to Eating Out! With options like grilled meat and fish, rich curries, and fan favorites like Butter Chicken and Chicken Tikka Masala, this cuisine is easy to order low carb and still feel satisfied. 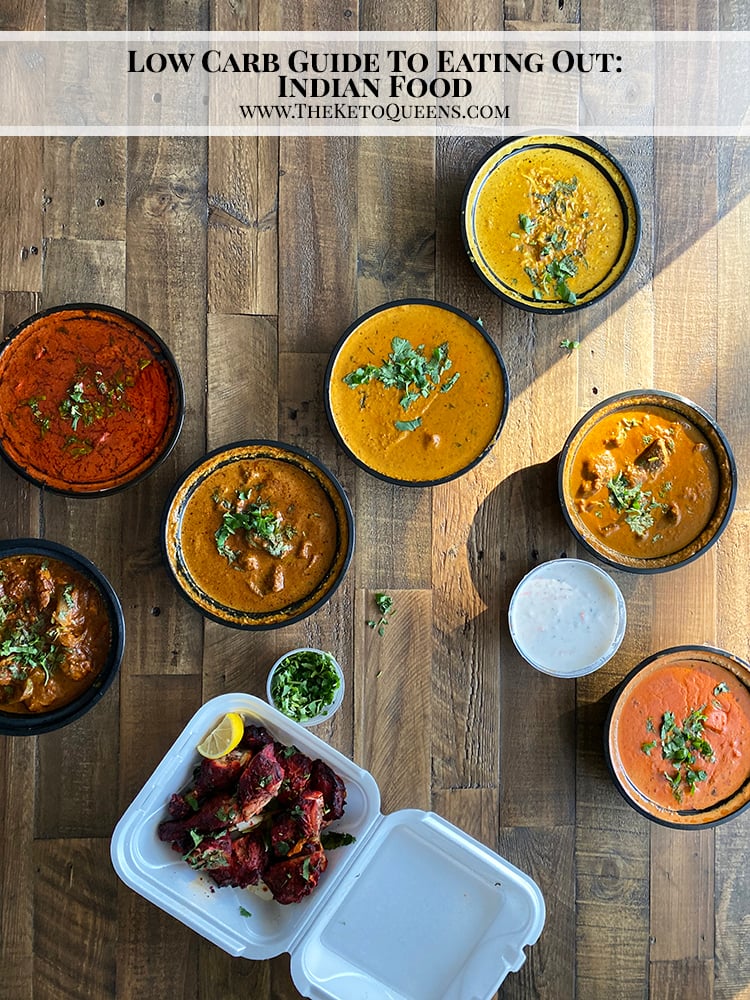 One of the best ways to get a delicious low carb meal while traveling is to head to an Indian restaurant. Faith was introduced to Indian food in undergraduate school by her best friend who was Indian. Lara never tried it until she was in her 30’s when Faith made it for her. Now Lara is a huge fan too!

We both love Indian food so much that we ate it four times in one month last summer when we were in Paris! We’re going to talk about the best low carb Indian food options, and show you some of our favorite Indian dishes to order when we want to stay low carb and keto friendly.

If you’re a fan of Indian food, you probably are familiar with Butter Chicken and Chicken Tikka Masala. These are crowd-pleasing options that even picky eaters usually enjoy. But don’t be afraid to try something new! 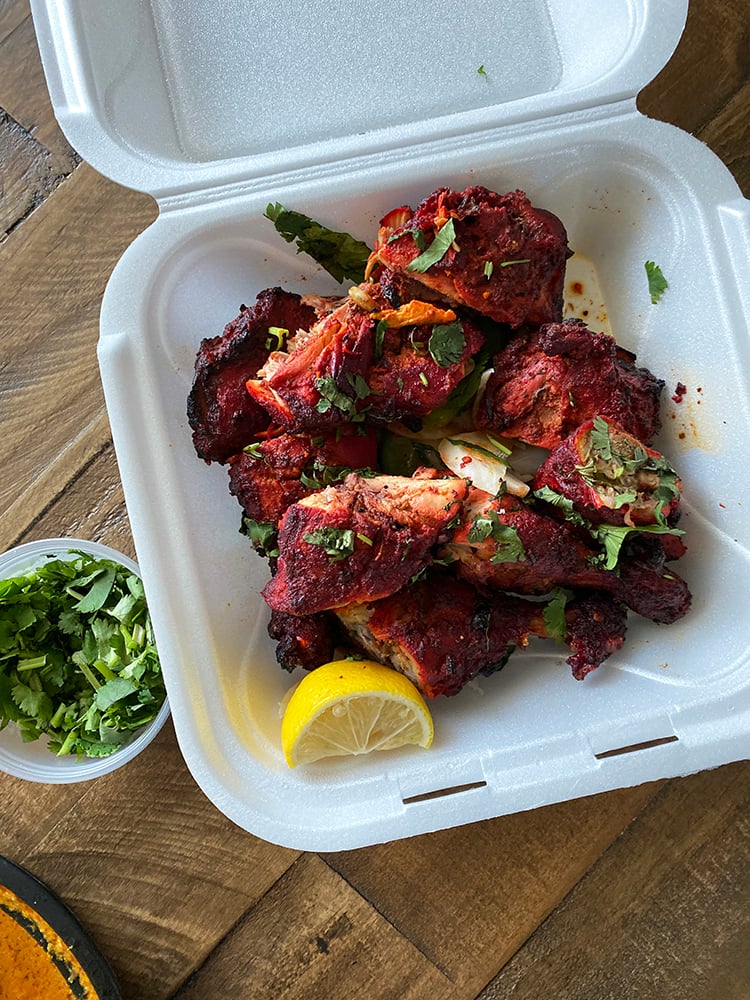 What Is the Difference Between Butter Chicken and Chicken Tikka Masala?

The difference between Butter Chicken and Chicken Tikka Masala is that Butter Chicken is usually creamier, less heavily spiced, and less tomato-y. Although, note that this can vary from restaurant to restaurant! 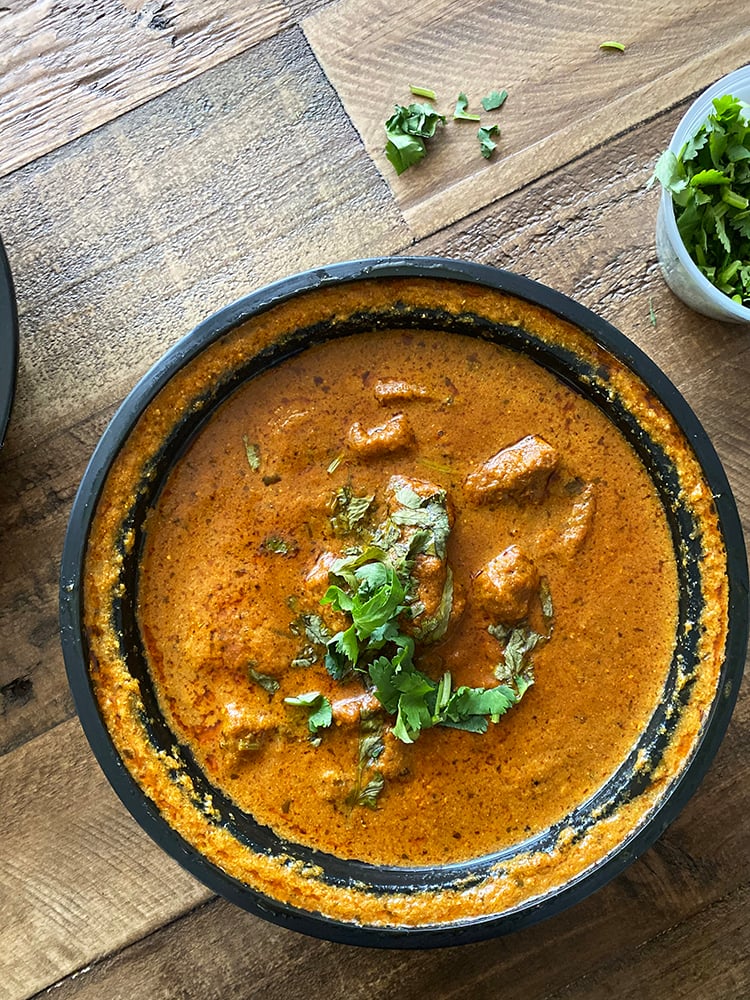 We found that at one of our favorite Indian restaurants (Bollywood Aroma in St Petersburg, FL), the Butter Chicken is darker (more of a brick red color), more heavily spiced, more tomato-y, and extremely oily. On the other hand, the Chicken Tikka Masala from this restaurant is creamy and lighter in color. 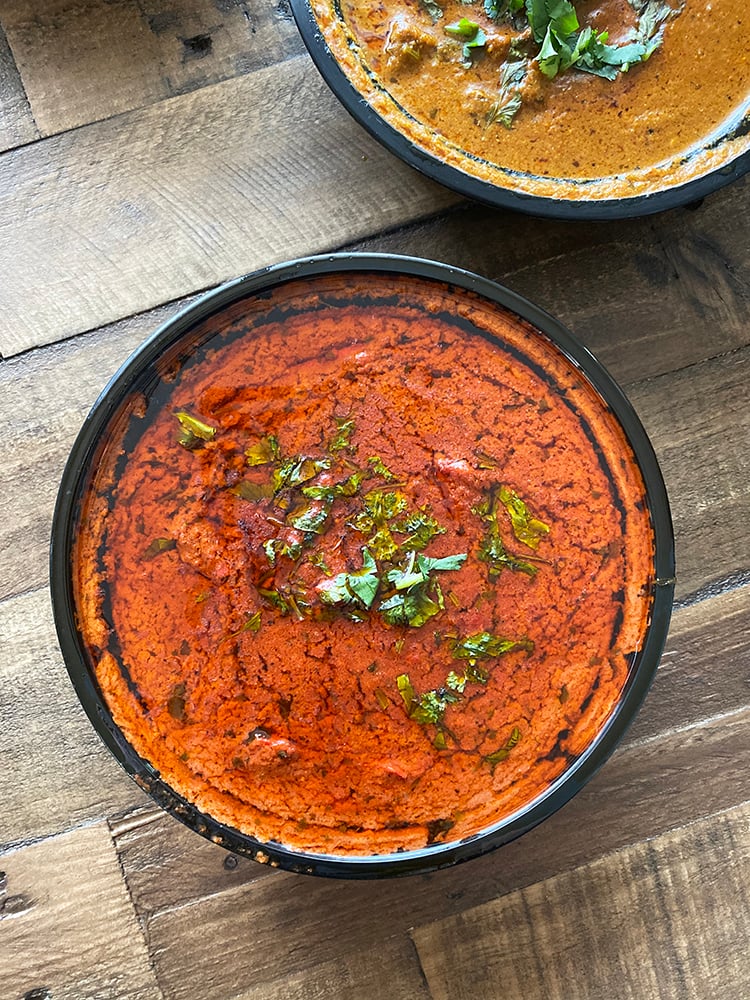 Chicken is the popular choice, but red meat-based recipes using lamb or goat are also great options. Goat is actually a bit milder and less gamey in flavor than lamb typically is. 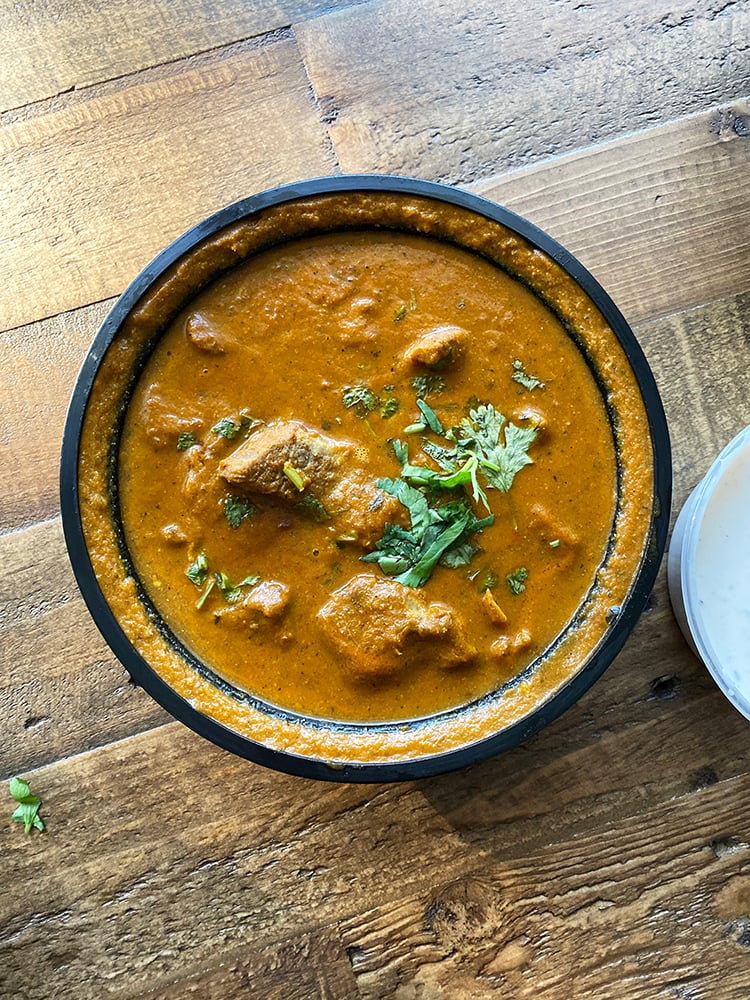 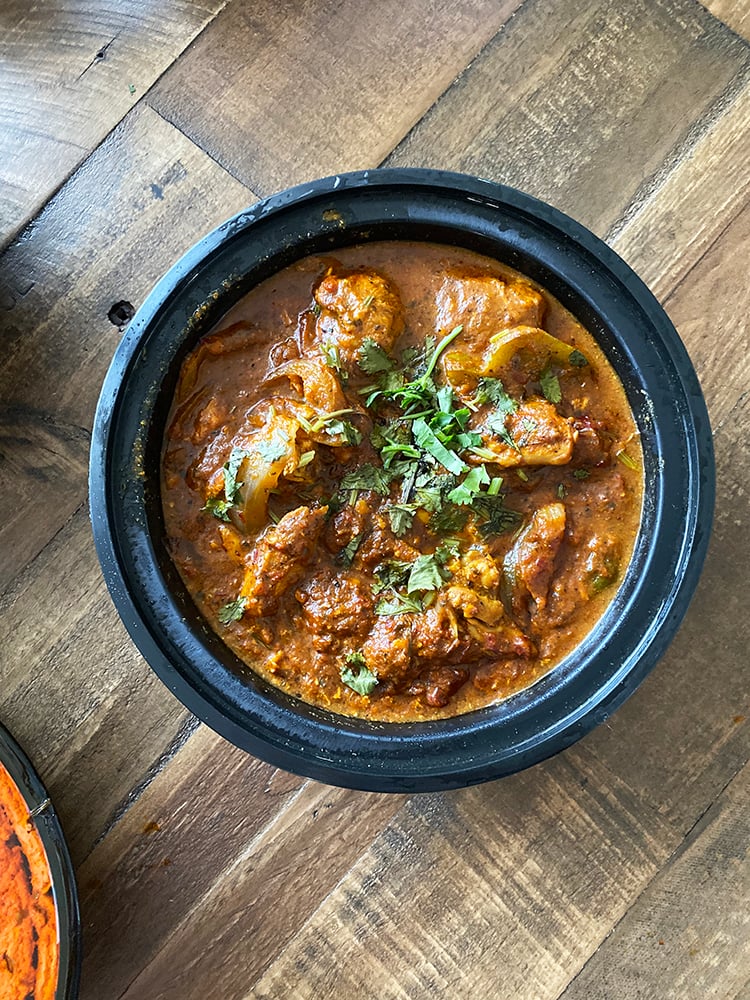 Pro Tip: Goat curry is typically served with the bones in, so you’ll have to be careful and remove the bones as you eat it.

For another protein source, Indian fish dishes are flavorful and satisfying thanks to the rich sauces they’re often served with. Prawns or shrimp are popular, and so are some types of white fish.

Here are a couple Indian fish dishes to try: 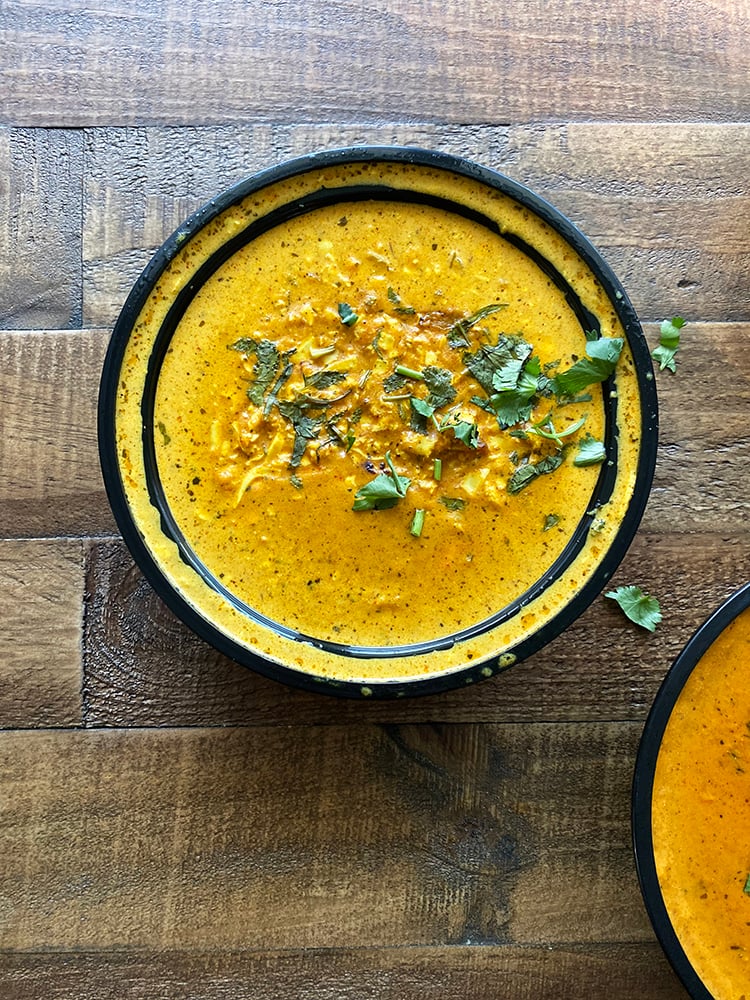 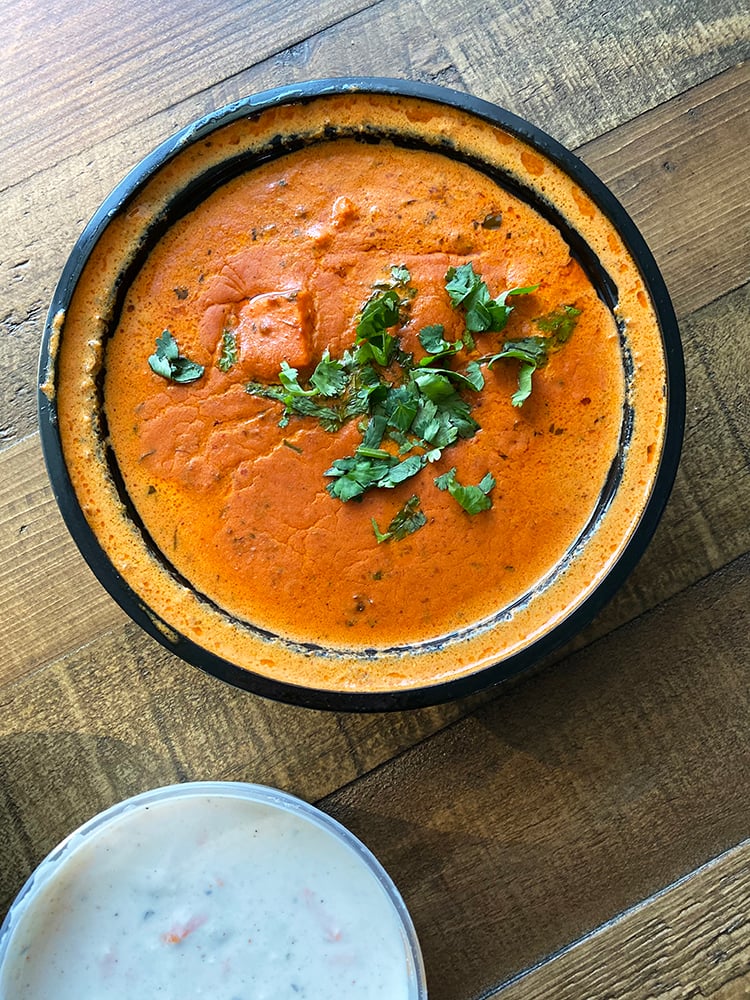 Above: Paneer Butter Masala with Side of Raita from Bollywood Aroma Indian Cuisine in St Petersburg, FL

Pro Tip: Although you can find a lot of bean and legume-based vegetarian Indian main courses, these are typically quite high in carbs and so we usually avoid them.

We typically steer clear of a lot of the side dishes at Indian restaurants because they’re higher in carbs, such as rice pilafs and naan. However, we do have a few lower carb options that we occasionally order:

Tips When Eating at Indian Restaurants: 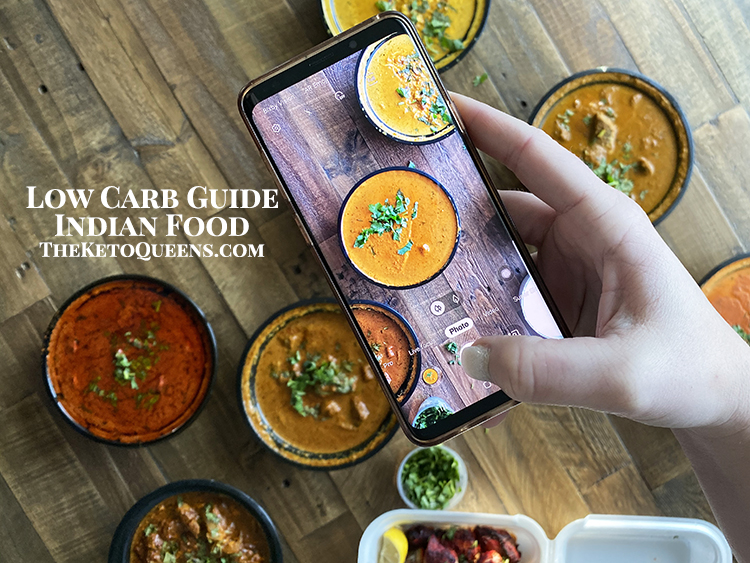 Here are some of our favorite Indian restaurant dishes that we’ve enjoyed all over the world.

This Michelin-starred restaurant was super small, very dark, intimate, and romantic. The food was decent, but not our favorite Indian food in Paris. The portion sizes were small compared to other places, and it wasn’t quite as flavorful.

It was only a three-minute walk from our Airbnb flat to this restaurant, so we came back twice. We loved the Lamb Meatball Curry, and also enjoyed the Butter Chicken and Tandoori Chicken. 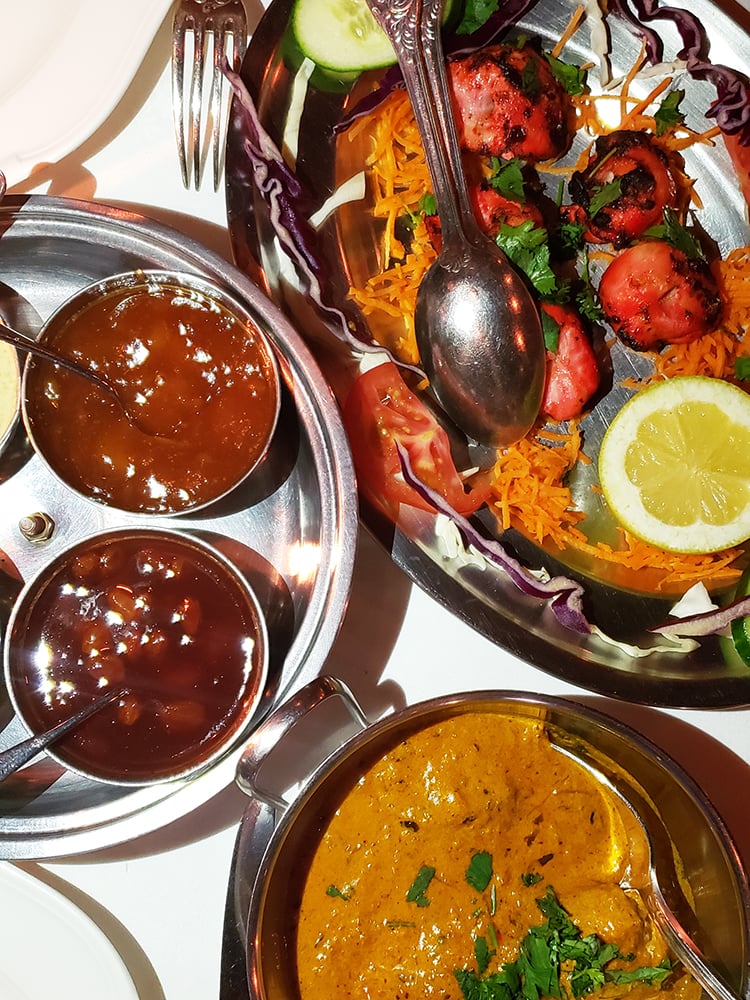 Above: Tandoori Chicken with Sauces and Lamb Meatball Curry at Ravi 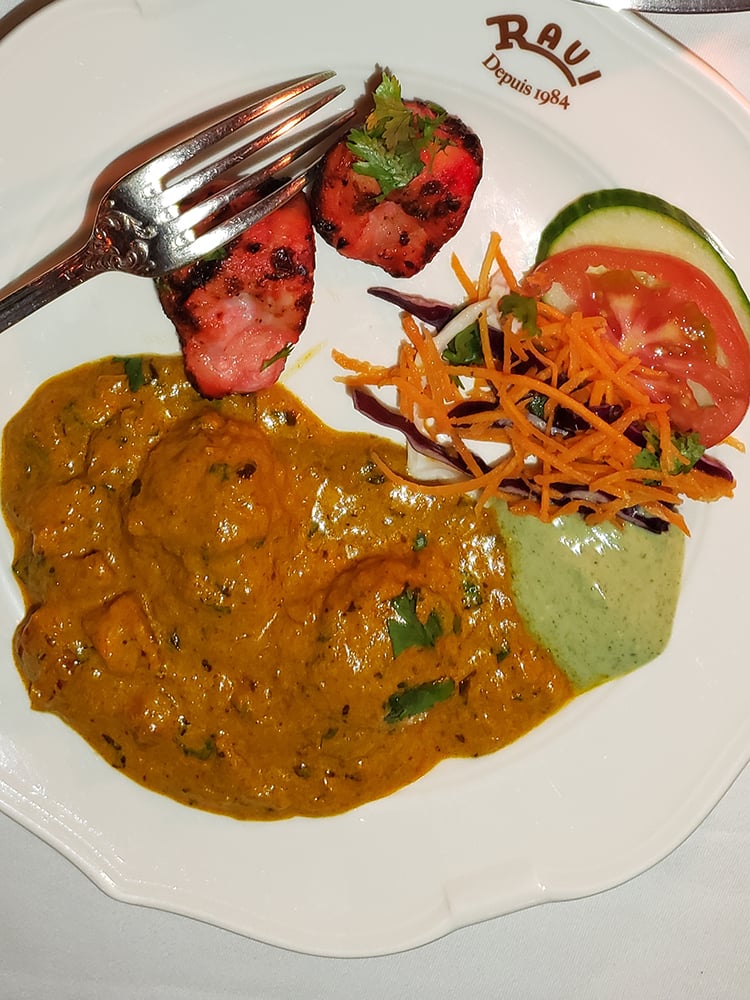 Above: Alllll the hearts for the Meatball Curry at Ravi.

This restaurant was our favorite Indian restaurant in Paris. They serve their food to the French Parliament! It was also the best service of any restaurant (Indian or otherwise) that we got anywhere in Paris. 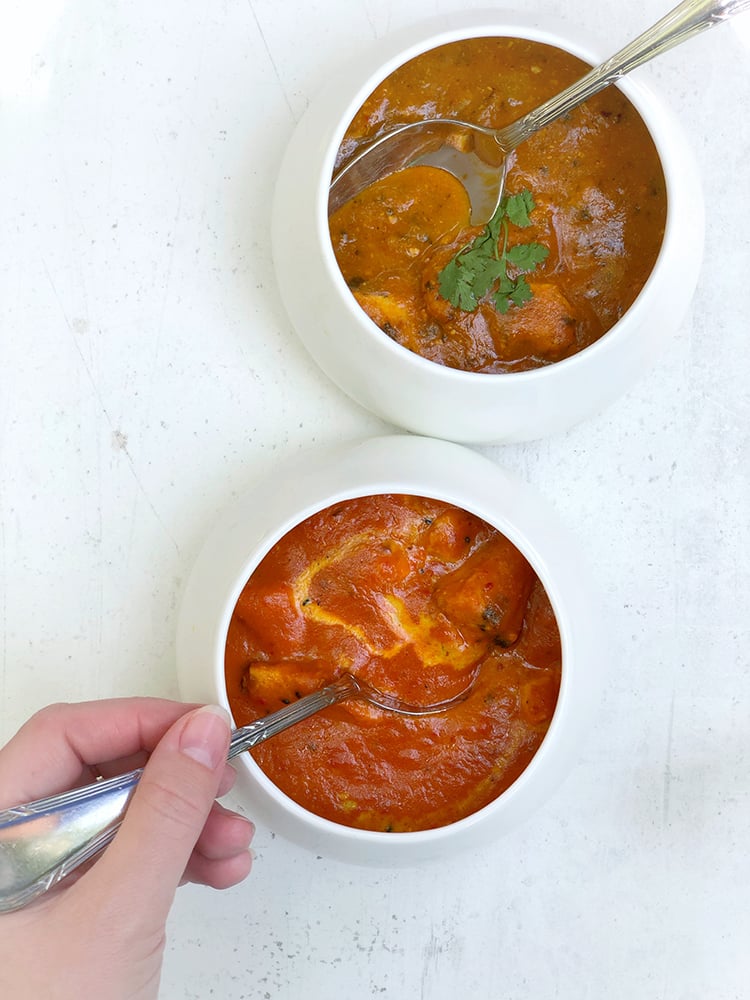 This restaurant was big and wide open with windows. The portions were also fairly big and reasonably priced. The food was solid, we’d definitely order it again. 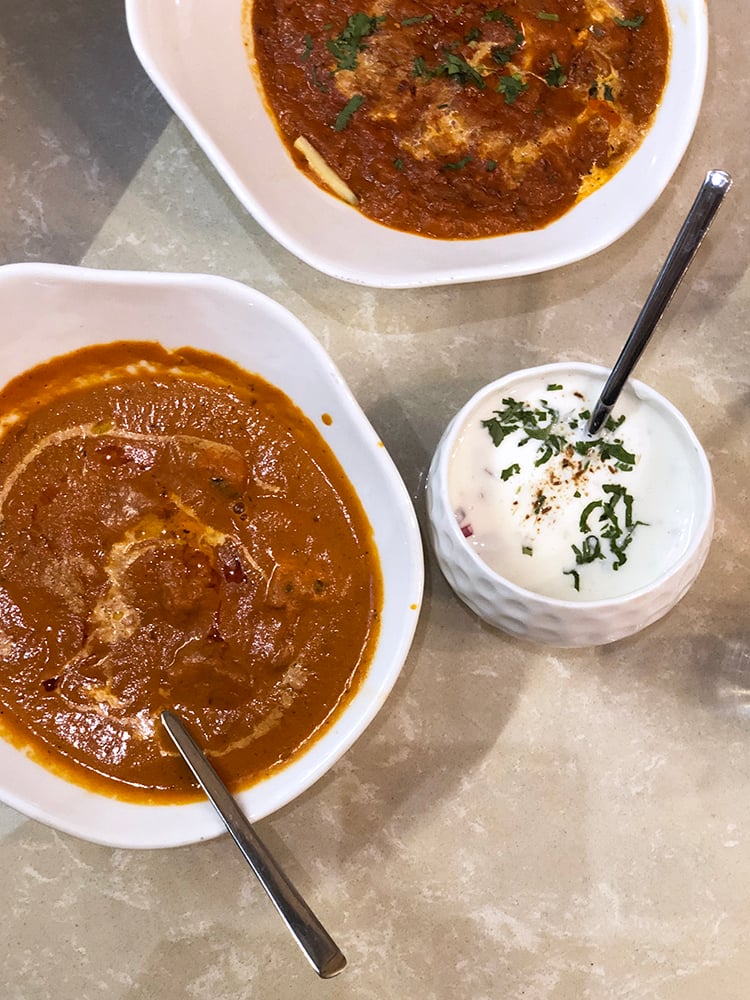 We have to be honest, this restaurant was our least favorite Indian food that we tried in Europe. Ironically, it had the best reviews on Trip Advisor and Yelp. However, the food quality wasn’t great, the service was awful, and the ambiance was nonexistent. Sadly, we wouldn’t go back there again. 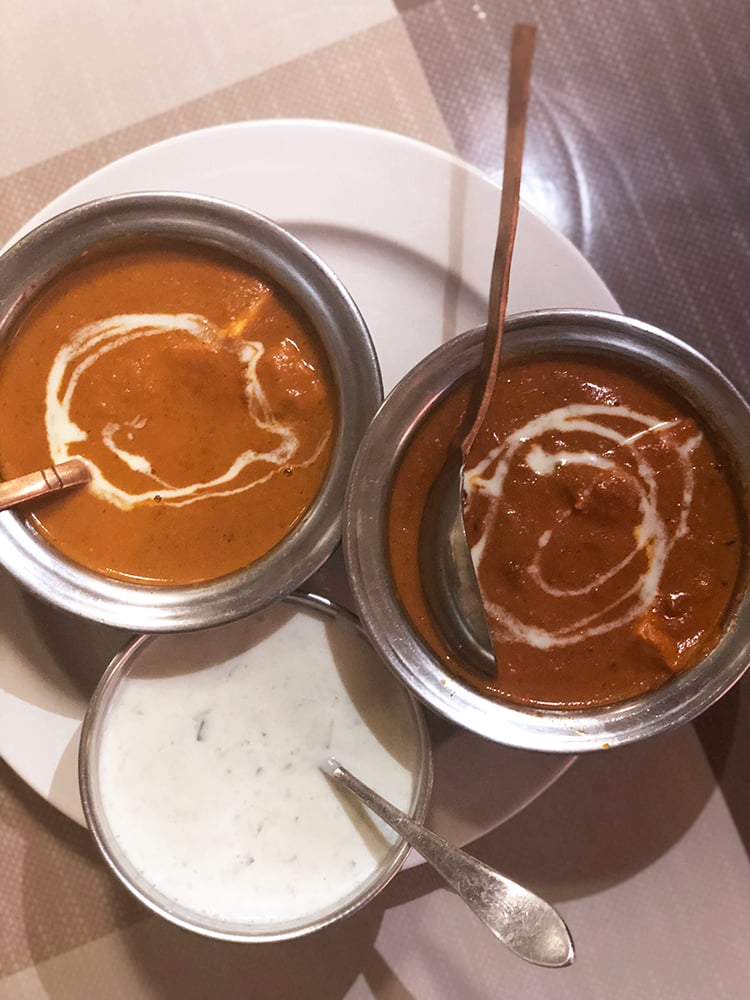 Above: Paneer Curry, Butter Chicken, and Raita at Taste of India

We absolutely LOVE Bollywood Aroma! Their food is consistently great, and they are friendly and very accommodating. 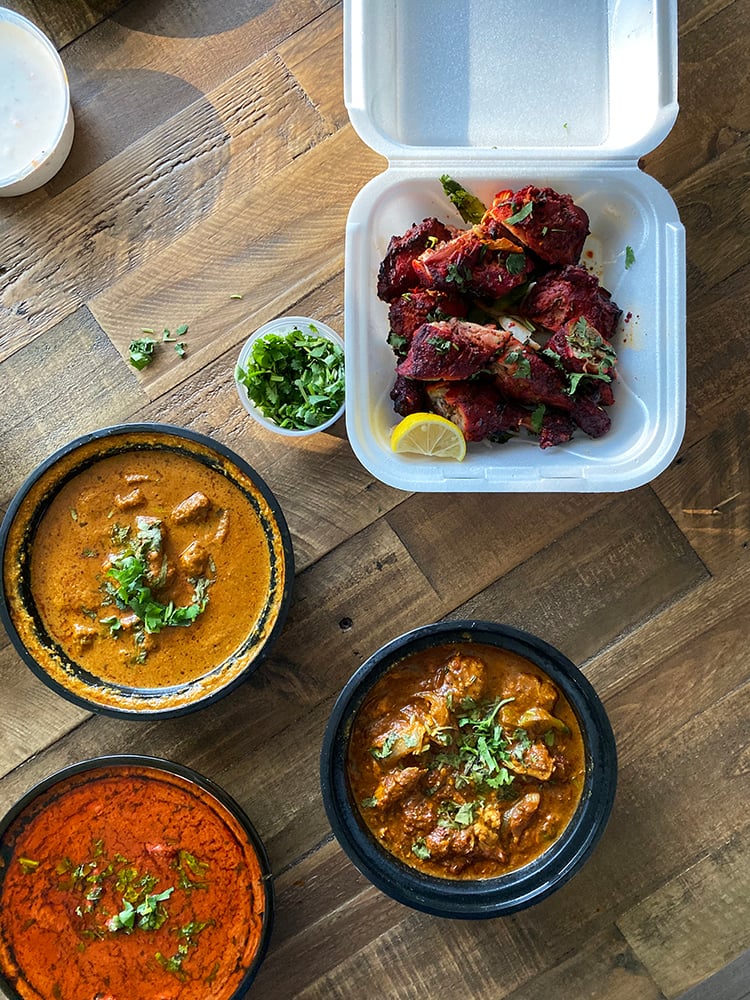 Check out our other Low Carb Eating Out Guides

Where’s your favorite Indian restaurant? And what low carb options do you order? Share with us in the comments below!

For something a little longer term, you might be interested in our 4 week keto meal prep course. It comes with 4 weeks of keto meal plans (1200, 1500 and 1800 calorie levels), weekly keto grocery lists, 40 keto recipe ebook, how to meal prep ebook, videos and more! 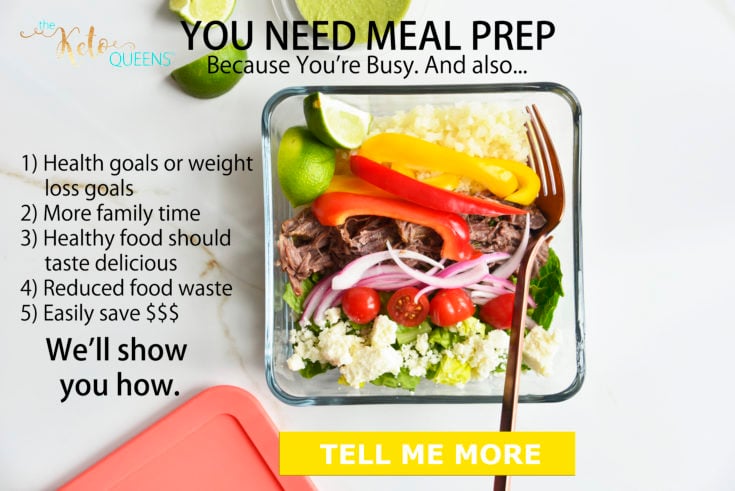 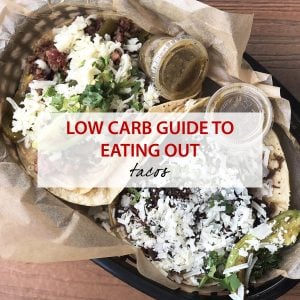 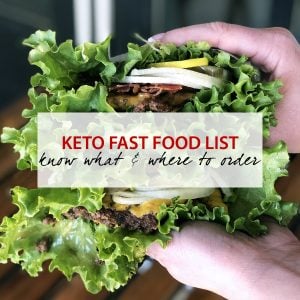 Keto Fast Food List – Know What and Where to Order 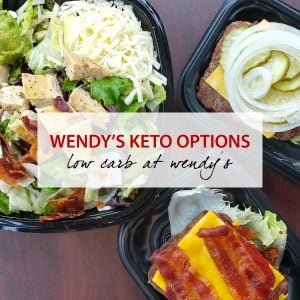 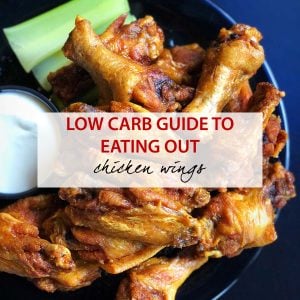